Vice Parliament Speaker of Georgia Tamar Chugoshvili has urged dip corps in Georgia, local and foreign organisations to particularly monitor the by elections in Zugdidi, western Georgia, “as there are obvious signs that the opposition have plans to stir unrest there.”

The statement comes after the rally of the United National Movement (UNM) opposition and its allied parties in front of Zugdidi district election commission today, saying they are protesting verbal and physical abuse of the UNM members and their mayoral candidate yesterday and the handing over of voters’ lists to polling stations in Zugdidi “through the violation of law.”

The UNM members stated during the rally that 5,000 activists from different Georgian regions will be sent to Zugdidi on the election day to “protect the May 19 by elections from rigging.” 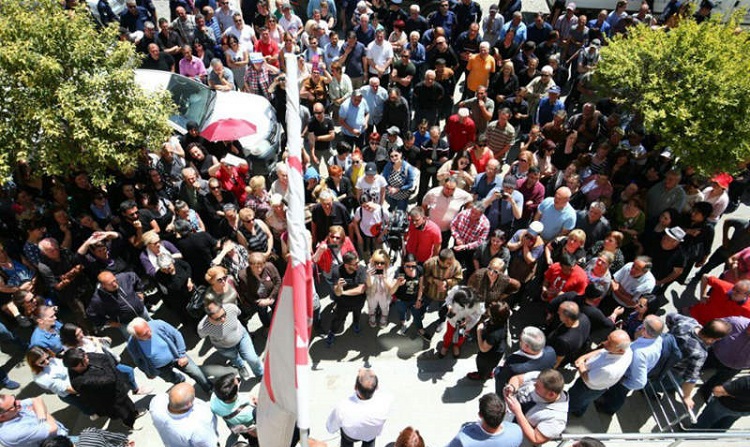 The opposition say that they will do their utmost "to protect the elections." Photo: netgazeti.

In their previous statements the UNM members said that “saving the country from the current government should start from Zugdidi,” where former first lady Sandra Roelofs is running for the mayor.

All the signs are in place that the situation might get tensed in Zugdidi and that is why we urge the diplomatic corps and observers Zugdidi to be in focus,” Chugoshvili said.

She stated that it is the only goal of the government to conduct the elections in the transparent and the peaceful environment.

Georgian Prime Minister Mamuka Bakhtadze said that in Zugdidi and other regions the elections will be held “with the protection of the highest standards,” and no one will be allowed to discredit the process.

The Georgian Central Election Commission responded to the opposition earlier today by saying that the lists were handed “in full line with the law”. However, to avoid speculations, the lists were taken back to the district election commission.

Relofs said that the ruling party wished to use the personal information on the lists to influence the decisions of voters.

She also urged the diplomatic corps to “protect the elections from rigging.”

Georgian Interior Minister Giorgi Gakharia stated yesterday that the number of policemen at polling stations will be specified after studying the situation and consulting with partners.