Works by Georgian artists Levan Songulashvili will present an exploration on the theme of water at a Berlin contemporary art venue later this week.

Some of the latest works in Songulashvili’s STYX series will take up the space of 68projects, a space by Galerie Kornfeld, for the display black I sea.

Showcasing creations by the New York-based artist, the exhibition will present his paintings along with works by his German counterpart Christian Awe.

The show combines powerful, life-affirming colour compositions by Awe with the black and white philosophical approach to painting by Songulashvili.”

The motives and emotional medium is water, its energy, its depth and intangibility, its fire, its colours”, says a release by organisers.

The event will highlight Songulashvili’s artistic themes on jellyfish and underwater plants, exhibited at galleries in the United States and Georgia over the recent years.

His representation of colours and visibility was noted by the Berlin gallery in the event preview that praised the young creative as "one of the most promising contemporary artists of today”. 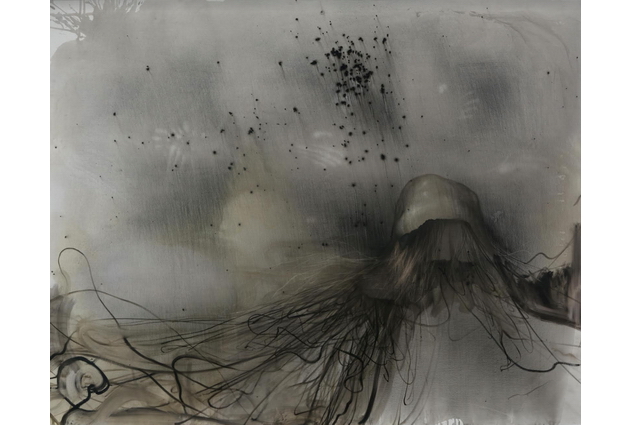 Songulashvili produced artwork as continuation of his STYX series while working within a residency at 68projects. Photo: courtesy of the artist.

[I]n Levan Songulashvili’s work everything is revealed and made visible; including colours that meld into the shadowy, suggestive, changeable, and back to that dreamlike realm where knowledge and ignorance, where the conscious, half-conscious and unconscious, flow underwater”, says the venue’s profile of the artist.

Some of the artist’s works within STYX will also be displayed in an upcoming exhibition at the Tbilisi-based ERTI Gallery starting next month.

Curated by Mark Gisbourne, former president of the British Art Critics Association, the Tbilisi display will run alongside the 68projects event that is set to conclude on April 20.

Located opposite the Kornfeld venue on Berlin’s Fasanenstrasse, 68projects is a "150 square metre artist project space” in the capital city that works to support "selected individual artists”.

Songulashvili spent three months working within a residency at the gallery, creating "four large-format oil paintings” of the STYX series.