A statement made by representative of de-facto Tskhinvali Yegor Kochiev for ‘South Ossetian’ news agency Res clearly shows that the Russian-occupied region plans to continue the borderisation process to “simplify the lives of people” in the unrecognised region.

The head of de-facto Tskhinvali delegation left the the Incident Prevention and Response Mechanism (IPRM) meeting held in Ergneti yesterday without any comment for Georgian media.

However he later spoke to Res, and said:

As at the previous meetings, the Georgian party referred to the fact that this was a political issue. We have tried to point out that this issue is of purely practical importance to facilitate the life of people who will know where the territory of South Ossetia and the territory of Georgia is. And there will not be all the related sanctions for the detention of violators, fines, court proceedings,”  Kochiev said. 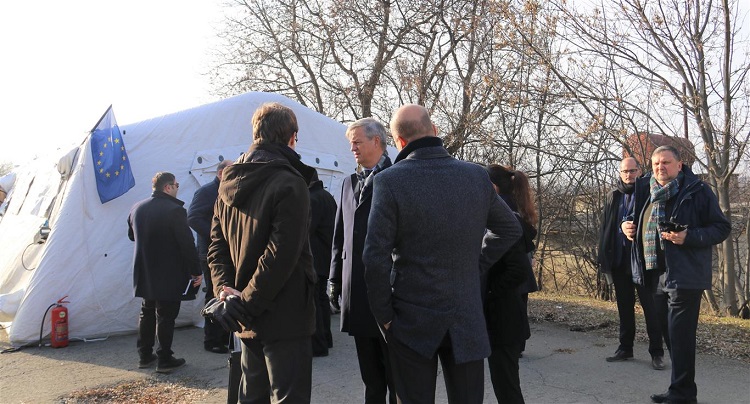 Before actual start of the official part of the meeting, pre-meeting discussions took place outside the main tent. Photo:EUMM press office.

The statement of the European Union Monitoring mission (EUMM) released after the meeting reads that borderisation is a violation of the right to freedom of movement for local residents.

Participants discussed recent developments at the Administrative Boundary Line, including recent events in the Atotsi area. On the latter, the co-facilitators noted the efforts of security actors to maintain stability along the Administrative Boundary Line, while expressing concern over the impact of recent borderisation on the local population’s freedom of movement,” the statement read.

Russian troops located near Tskhinvali continue the process of border demarcation along the administrative boundary line  (ABL) otherwise called ‘borderisation’ or ‘creeping occupation’, which results in the gradual advancement of the occupation line inside Georgia to enlarge the Russian-held territory.

After the Russia-Georgia of 2008, 20 per cent of Georgian territory remains occupied by Russian forces.

The IPRM was created in February 2009 as a result of the Geneva Discussions that followed the 2008 Russia-Georgia conflict in Georgia.

The meetings are seen as an opportunity to identify and discuss potential risks and follow-up of incidents and issues affecting the communities on a daily basis. The meetings are co-facilitated by the OSCE and the EUMM in Georgia.