LGBT rights, ‘family purity’ and police on high alert:
What’s May 17 like in Tbilisi?

Police have been on high alert since early morning today as May 17 features two events in Tbilisi: the International Day Against Homophobia and Transphobia (IDAHOT) and the Family Purity Day that the Georgian Orthodox Church launched in 2014 to coincide with IDAHOT.

Each event was marked with separate rallies today and police had to tighten security measures in order to avoid confrontations between supports and opposition of the LGBT (lesbian, gay, bisexual and transgender) movement.

Extra security norms were needed to be applied today as Georgia had an unpleasant experience connected to this date in the past. In particular, on this day in 2013 thousands of people were involved in a violent clash in central Tbilisi where IDAHOT supporters were physically attacked and forced to end their peaceful demonstration.

On that day IDAHOT supporters, gathered at Freedom Square, were violently disrupted by thousands of counter-demonstrators, including some Orthodox clergy.

Since then gay rights activists have not held a demonstration in Tbilisi to mark May 17 until today.

Today’s IDAHOT rally became possible after the LGBT movement and police reached a deal that the demonstration would be held in a manner where police would be in control and could protect participants.

To this end, LGBT activists gathered at a secret location early this morning from where they were escorted in mini buses by police to the building of the Government Administration in central Tbilisi. They were given an hour to exercise their right to freedom of expression in front of the government building during which police had blocked all roads leading to the area. 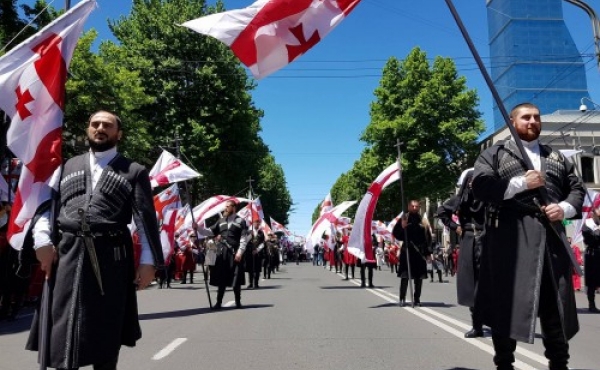 In parallel to this, thousands of people gathered in front of the Parliament Building several kilometers away from the Government Administration to celebrate the Family Purity Day. Reportedly, some participants of this rally attempted to reach the location where IDAHOT event was being held but police didn’t allow them to do so.

After the LGBT movement ended their demonstration, they were taken away from the location in mini buses again by police.

Demonstrators said that this form of rallying was nothing like they wished for but they still welcomed the police’ readiness to ensure safety while letting LGBT activists enjoy their right to freedom of speech.

"It is very good that the LGBT activists were given the opportunity to mark this day but it is very sad that police have to protect one group of citizens from the other group of citizens. This means our society still needs to develop", said Sophio Sahamanidi, adviser to the Georgian President on minority issues.

Meanwhile participants of the Family Purity rally are still gathered at five different locations across the city and will end their demonstration at the Holy Trinity Cathedral in Avlabari later today. Patriarch Ilia II will meet them at the Cathedral.