LGBT rights activists, Orthodox clergy and conservative Christian activists supporting "purity of family” were all represented in Tbilisi streets on the International Day Against Homophobia, Transphobia and Biphobia on May 17.

Despite several people being arrested for minor offences, the day passed without major controversies between opposite groups.

A day before May 17 Georgia’s LGBT community announced they would not hold a rally to mark international LGBT awareness day because they had met with law enforcers, who said they could not guarantee the protesters safety.

Previous experience showed it was not safe for gay-supporters to march in the street. On May 17, 2013 an anti-homophobic rally was held in central Tbilisi, which was attacked and violently dispersed by an aggressive crowd associated with the Georgian Orthodox Church.

Conservative Christian activists planned a really in central Tbilisi’s Rustaveli Ave this year so to ensure security and safety police offered LGBT activists the chance to choose another place to hold their demonstration, which the activists turned down. They said it was important for them to hold a rally on Rustaveli Ave, otherwise they would not do it.

However, several performances still took place to support the gay community and protest against homophobia in the centre of Tbilisi. 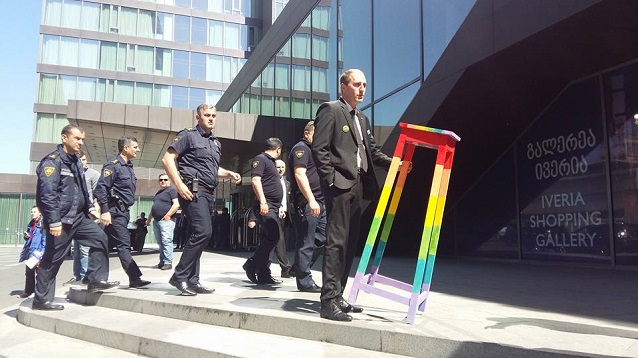 A stool became a symbol associated with the May 17, 2013 violence, after an Orthodox priest was filmed chasing a gay activist with a stool in his hand. Photo from liberali.ge

Activists brought a rainbow-coloured stool to Rose Revolution Square near Radisson Blu hotel in Tbilisi. A stool became a symbol associated with the May 17, 2013 violence, after an Orthodox priest was filmed chasing a gay activist with a stool in his hand.

The rainbow stool performance was to protests against the World Congress of Families (WCF), which was simultaneously being held inside the Radisson Blu hotel, organised by Georgian businessman Levan Vasadze who is known for his very conservative ideas. WCF is a United States coalition that promotes "Christian right values” internationally. It opposes same-sex marriage, pornography, and abortion, while supporting a society built on "the voluntary union of a man and a woman in a lifelong covenant of marriage".

Meanwhile another group of gay activists were seen near the Patriarchate of the Georgian Orthodox Church, where they painted the walls of the Patriarch’s office.

Here seven people were arrested by police and were charged under Article 150 of the Administrative Offenses Code, involving making unauthorised inscription or painting on public places. Four of them were also charged with disobeying police orders.

As of today all of the arrested activists have been released. A court hearing for six of them was scheduled for May 20 while the other one will face the court on May 30. The court will decide whether or not these people will be fined.

Meanwhile another small group of LGBT activists staged a sarcastic performance titled ‘funeral of statehood’ in front of the Interior Ministry. They protested against authorities who "couldn’t give a guarantee” of protecting activists, which resulted in no anti-homophobic rally being held in central Tbilisi.

The performers carried an improvised coffin, while one person was dressed as a priest conducting a funeral ritual.