Georgia: Most accepting of gay community in Caucasus region

Georgia has scored highest in the Caucasus region and 22nd in Europe in the latest review of how lesbian, gay, bisexual, transgender and intersex (LGBTI) people experience human rights across the continent by campaign group ILGA-Europe.

Meanwhile today the European Court of Human Rights ruled that Georgian authorities failed to adequately protect gay-rights activists and should compensate victims of 2012 incident, where the country was ruled by the ex-president Saakashvili and the party United National Movement (UNM).

The latest ILGA rating saw Georgia rise nine places on the Index since 2014, when the country placed 31st in Europe.

After looking at how well 48 different nations ranked on issues such as marriage equality, employment, adoption and medical treatment, the ILGA (European Region of the International Lesbian, Gay, Bisexual, Trans and Intersex Association) gave Georgia a score of 36 percent on its annual Rainbow Map.

The result put Georgia above all other countries in the Caucasus region for LGBTI rights and 22nd place overall.

The United Kingdom held onto its crown as the country which was the most accommodating of the LGBTI community, while Belgium scored second and Malta jumped eight places to come third.

Despite this, Georgia still found itself "under pressure from pro-Russia forces labelling LGBTI people as a Western import. Bias-motivated speech and violence remained common,” the report said. Read more here.

Today the European Court of Human Rights released its verdict about the May 17, 2012 case where members of a Georgian LGBT rights group officially challenged Georgia as they believed their peaceful rally was illegally dismissed by religious groups and police failed to protect them.

The European Court decided the Georgian Government should pay a share of €33,500 (about 88,000 GEL) to the 14 applicants in the next three months.

"The Court reiterates its findings that the attack on the applicants during the march of 17 May 2012 to mark the International Day Against Homophobia was instigated by those with a hostile attitude towards the LGBT community in Georgia,” read the Court’s decision.

"Furthermore, that violence, which consisted mostly of hate speech and serious threats but also some sporadic physical abuse in illustration of the reality of the threats, rendered the fear, anxiety and insecurity experienced by all thirteen applicants severe enough to reach the relevant threshold under Article 3 read in conjunction with Article 14 of the Convention.”

The European Court also said in regard to reports of negative attitudes towards sexual minorities in some parts of society, as well as the fact that the organiser of the march specifically warned police about the likelihood of abuse, law-enforcement authorities were under a compelling positive obligation to protect the demonstrators, including the applicants, which they failed to do.

"Lastly, the authorities fell short of their procedural obligation to investigate what went wrong during the incident of 17 May 2012, with particular emphasis on unmasking the bias motive and identifying those responsible for committing the homophobic violence.” 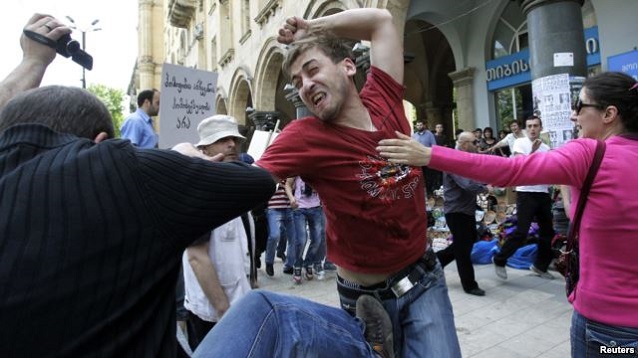 A gay rights activist clashes with an Orthodox Christian activist in Tbilisi on May 17, 2012. Photo by Reuters.

The applicants were Identoba, a non-governmental organisation set up to promote and protect the rights of lesbian, gay, bisexual and transgender people in Georgia, and 14 Georgian nationals aged between 23 and 56 and live in Tbilisi. In one case of the 14, the Court deemed irrelevant and did not specify any fine for the country to pay him.

The above-mentioned case concerned a peaceful demonstration on May 17, 2012 in Tbilisi to mark the International Day against Homophobia.

The event was organised by Identoba and attended by approximately 30 people, including 13 of the individual applicants.

During the event, demonstrators were threatened by counter-demonstrators – members of two religious groups – who outnumbered them.

The counter-demonstrators attacked several of the applicants physically, leaving at least three of them with injuries that required treatment.

According to the applicants, the police remained relatively passive in the face of the violence. Click here to read more about the case and about the court decision.