New security measures will track the status of Georgian citizens travelling to the Schengen Zone after new legislation lifting visa-requirements for Georgians will enter into force on March 28.

Based on the new regulations, Georgian citizens holding biometric passports can travel to the Schengen Zone for a period of 90 days within any 180-day period for purposes other than working.

The new measures will trigger an alarm system if a Georgian citizen overstays the 90-day limit and will inform the relevant European authorities.

Georgian Prime Minister Giorgi Kvirikashvili said at today’s Government Meeting that it is important for Georgia to prove itself a responsible partner to the EU and to respect the conditions of the recently-received privileges of visa-free travel. 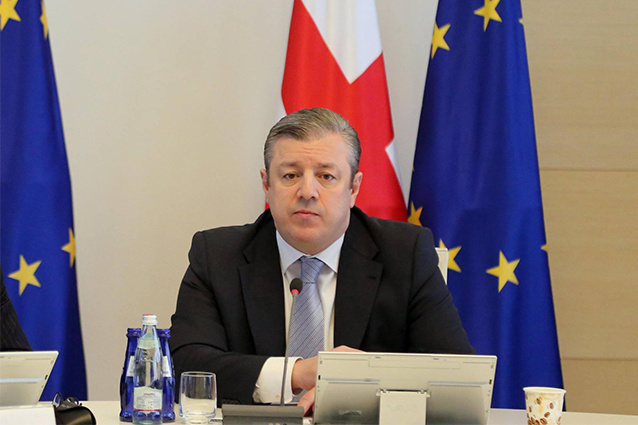 Prime Minister Giorgi Kvirikashvili introduces new security measures that will track the status of Georgian citizens travelling to the Schengen Zone at the Government Meeting. Photo by PM's press office

Prime Minister Kvirikashvili said that if a Georgian citizen overstays the 90-day limit, "we will send information to EU-member states...and begin actively searching for this person”, and added that although this process will be funded by the government, the violator will be ultimately responsible for all incurred expenses.

Kvirikashvili stresses that Georgian citizens should be aware of the possible consequences before travelling.

The EU-Georgia Visa Liberalisation Dialogue started back in 2012. Since then the country has carried out a number of reforms and adopted and amended a number of laws in order to align certain policy and legislative standards with those of the EU.

#VisaFree travel to come into force on March 28.Together w/ students, I will travel to #Athens and #Brussels to celebrate visa waiver

Prime Minister Kvirikashvili will be among the first to enjoy the right of visa-free movement across the EU. He will lead an unofficial youth delegation to the ancient Greece capital of Athens and later to Belgium’s capital of Brussels in the centre of Europe.

The Georgian delegation will celebrate Georgia’s historic achievement with a series of events.