Bach in the Subways:
Tbilisi to mark global date with street concerts

Young students of music schools in Tbilisi will join forces this Saturday to celebrate the music of famous German composer Johann Sebastian Bach in the capital city’s streets.

Under this year’s edition of the Bach in the Subways global event, the performing artists will entertain pedestrians on Mazniashvili Street, next to the newly renovated Aghmashenebeli Ave.

Designed to mark 332 years since the birth of Bach, the annual date brings together cities in dozens of countries around the world. Georgia has been part of the international celebration for the past three years.

Our newly updated list of Bach in the Subways cities is STAGGERING – add yours for #BachInTheSubways2017!! https://t.co/8utlDXXnospic.twitter.com/6mDUvPQ9gn

Every year for Bach’s birthday a spontaneous, global community of musicians unites to sow the seeds for future generations of classical music lovers and share their joy and inspiration for their artform”, says a summary of the date by its organisers.

The Bach in the Subways Georgia show will also receive support from the Tbilisi-based Newton Free School.

Last year’s Tbilisi event was held in the garden of the Tbilisi State Opera House, with the children's orchestra of Tbilisi's Central Music School hosting enthusiasts of Bach’s music. 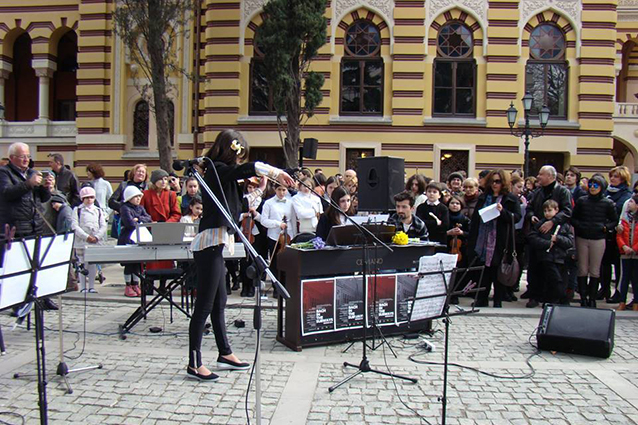 The foundations for the annual celebration were laid by cellist Dale Henderson in 2010 when he staged solo performances of Bach's Cello Suites in subway stations throughout New York, in the United States.

Inspired by the idea of popularising classical music to everyday audiences outside of official concert halls, Henderson invited two other performers to join the event in 2011, marking the first Bach in the Subways occasion.

The number of participants involved in the global celebration has increased each year since its founding. In 2015 thousands of artists celebrated the late composer's 330th birthday in 40 countries around the world.