Bach pieces will be played by young musicians from the children's orchestra of Tbilisi's Central Music School in the garden of the Tbilisi Opera and Ballet State Theatre on Rustaveli Ave in central Tbilisi.

The orchestra will be joined by the music school’s choir and vocal soloists for the public performance honouring the celebrated 18th Century musician. 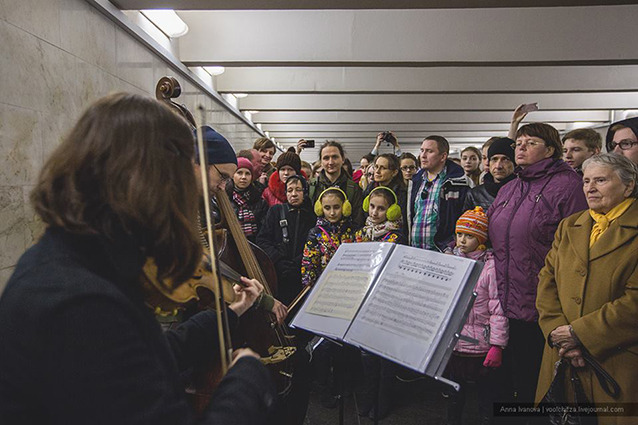 A 2015 Bach in the Subways event in Belarus. Photo by Anna Ivanova.

The free public show will see Georgia join 40 other countries in marking this year's Bach in the Subways global event, which the Tbilisi Central Music School orchestra first joined in 2015.

Foundations for the annual celebration were laid by cellist Dale Henderson in 2010 when he staged solo performances of Bach's Cello Suites in subway stations throughout New York, in the United States.

Inspired by the idea of popularising classical music to everyday audiences outside of official concert halls, Henderson invited two other performers to join the event in 2011, marking the first Bach in the Subways occasion.

The number of participants involved in the global celebration has increased each year since its founding. In 2015 thousands of artists celebrated the late composer's 330th birthday in 40 countries of the world.

The Tbilisi celebration will take place on March 19 at 2pm local time.

See the full map of countries supporting the 2016 Bach in the Subways event here.