The security situation on the administrative boundary line (ABL) between Georgia and its Russian occupied region of Tskhinvali (South Ossetia) was assessed as relatively stable, European Union Monitoring mission in Georgia (EUMM) said. 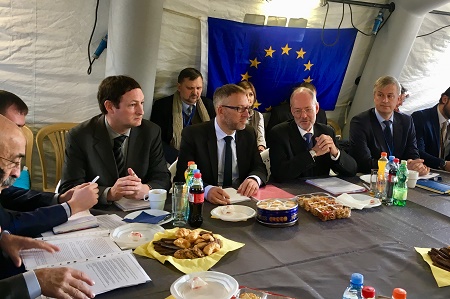 Co-Chairmen of the 82nd IPRM meeting Ambassador Guenther Baechler, Special Representative of the OSCE Chairperson-in-Office for the South Caucasus and Erik Hoeeg, Acting Head of the European Union Monitoring mission in Georgia (in the center), open the session in Ergneti. Photo by EUMM Georgia

However, EUMM said, "concerns were expressed over several specific cases of detention and shooting of firearms in the vicinity of the ABL”.

Particular attention was paid to release of Georgian citizen Giorgi Giunashvili who is illegally detained in Tskhinvali so called prison, as well as to necessity of transparent investigation into the case of Akhalgori resident Davit Basharuli”, the Georgian State Security Service said.

Illegal process of "borderisation” including installation of barbed wire fences and signs, and the way these activities are affecting people residing close to the ABL were also discussed at the meeting.