Georgia’s national rugby team has unveiled its new official jersey and an online store for team merchandise in an exclusive live event broadcast to thousands of sports fans online earlier this evening.

The hosts of the event revealed both home and away jerseys for the team to attending media. 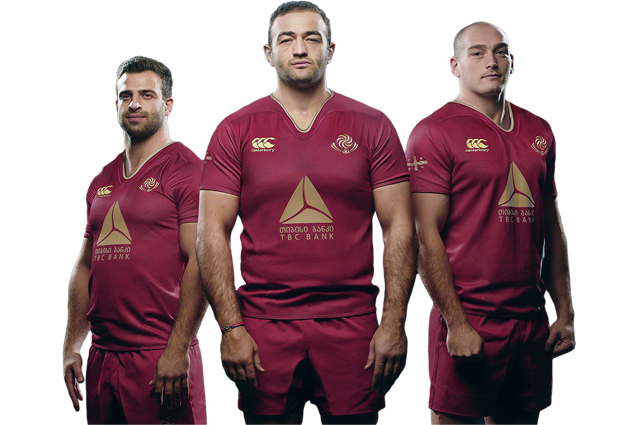 The new home jersey of The Lelos is made to symbolise the colour of wine as an internationally recognised mark of Georgian national culture. Photo: rugbystore.ge.

The home kit — shown to the public by the team’s celebrated captain Mamuka Gorgodze and back David Katcharava — is created in crimson colour, with the away jersey made in white.

Georgian Rugby said in a release the home kit colour was chosen to represent wine as an internationally recognised symbol of Georgian national culture.

Both kits feature badges and sponsor logos embroidered in gold colour. These include the logos of the team’s official sponsors TBC Bank, the makers Canterbury as well as the Natakhtari beer brewery.

In addition, the new jersey features the historical Georgian Borjghali symbol of the Sun, which has become a trademark of the national team also known as The Lelos.

Completing the design is a symbol resembling a vine branch, designed to underline the significance of winemaking heritage for Georgia and placed on the back of the shirt. 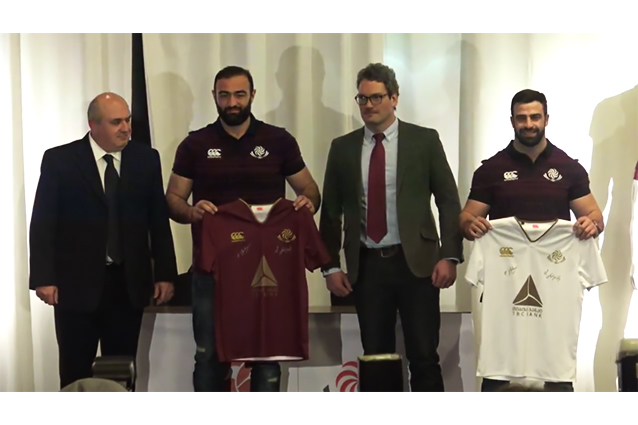 The new kits were revealed by national team players Mamuka Gorgodze (L) and David Katcharava. Screenshot from the reveal video.

Organisers of the special occasion also unveiled an online rugby merchandise store to the attending reporters and online viewers.

Founded in 1904, Canterbury is an international brand of rugby kits and sportswear. The company are known for making high quality jerseys for some of the most famous national teams including England and Ireland.

The Georgian national team will play its first match in the new jersey on February 11, when they face Belgium in one of the four opening matches of the Rugby Europe International Championships.