Prime Minister of Israel Benjamin Netanyahu believes Georgia and Israel, "two brotherly nations”, have a great future despite the fact they are small nations.

The Israeli Prime Minister told this to his Georgian counterpart at today’s meeting in Jerusalem.

We are connected by 2,600 years of friendship. Tens of thousands of Jews from Georgia now live in Israel. Many of the people, those attending this press conference as well, I want to name as my friends,” Netanyahu stated.

Today I met with Georgian PM Giorgi Kvirikashvili. We will strengthen our cooperation in security, health, water, and other areas. pic.twitter.com/y4inRNVg3E

He stressed both Georgia and Israel hope for a "protected, progress-oriented future.”

Netanyahu emphasized that ongoing developments in Syria and terrorist threats from the Islamic State could create danger for any nation, for those as well who are not directly involved in the conflict.

We [Georgia and Israel] plan to boost cooperation for security, healthcare and in directions that will create better lives for our people,” Netanyahu said.

Georgia’s Prime Minister stated that the 26 centuries of harmonious co-existence of Georgian and Israeli people is "deeply rooted in our national memory”. 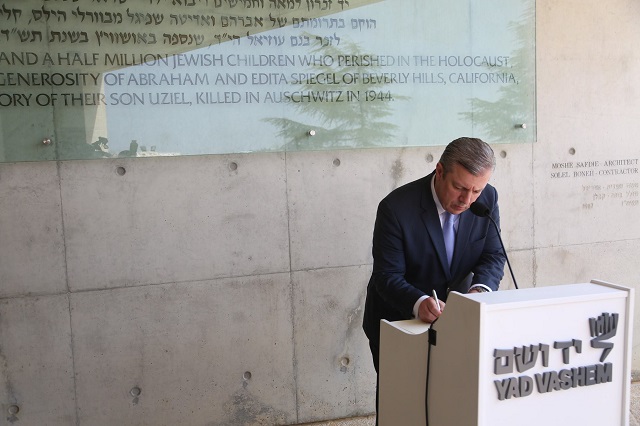 Georgia's PM paid tribute to Holocaust victims, stressing that Jewish  people had to underwent "a real hell" many times in their history. Photo by Prime Minister's press office.

He also stated that this year Georgia and Israel celebrated the 25th anniversary of the establishment of diplomatic relations.

During these 25 years we have managed to strengthen the friendship, which was established between the Georgian and Jewish people 26 century ago,” Kvirikashvili stated.

During the last several years, we have seen significant progress in our bilateral relations. We have achievements practically in all spheres, including political and economic cooperation, culture, education, tourism, agriculture and others.

Today we discussed how we can strengthen our cooperation in all those directions,” the Georgian PM added.

Thank you @netanyahu for warm reception&hospitality.Spoke a/ experience sharing in various fields&stimulation of economic cooperation pic.twitter.com/h6GuGtueAO

Kvirikashvili underlined the achievements of Israel in innovation and new technologies.

We discussed how we can start cooperation in this field and how we can share Israel’s experience in this regard,” Kvirikashvili said.

The Georgian PM invited Netanyahu to Georgia which was accepted.