Patriarch Theophilos III of the Holy City of Jerusalem and All Palestine has awarded Georgian Prime Minister Giorgi Kvirikashvili with the Golden Cross with Crown, Wreath, and Star.

It was for the first time this award has been granted to a high-ranking official by the Patriarch.

Theophilos III stressed it was an honor for him to host the Prime Minister of Georgian in the Holy Land.

Your country and your people, Georgia and Georgians, have a special link to Jerusalem, the Holy Land, and the Patriarchate of Jerusalem.

According to certain legends, Saint Nino, the patron saint of your country, was a niece of Patriarch Juvenal of Jerusalem. Of course, there are many other historical and cultural aspects that link us. The Patriarchate of Jerusalem has played an important role in guarding and protecting the Orthodox Faith," the Patriarch stated.

Kvirikashvili emphasized the contribution of Theophilos III to keeping peace and stability in the region, and invited him to Georgia.

Allow me to invite you to Georgia although the Patriarch of Georgia has already invited you. We will be happy to have the honor of hosting you," Kvirikashvili stated.

Honored the memory of Holocaust victims. This great nation has not only survived but has procured long-term peace&prospects of development pic.twitter.com/Q3pyilZuvC

Prior to the meeting yesterday Kvirikashvili met Prime Minister of Israel Benjamin Netanyahu, paid a tribute to Holocaust victims and spoke for the media.

In his comment after the meeting with his counterpart Kvirikashvili stressed Israel, as a country, "is of utmost importance for us.” 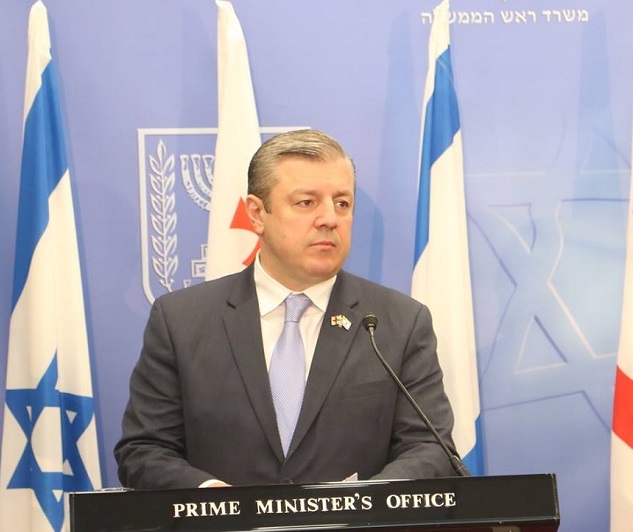 We face the same challenges. Israel could build a very strong country. It needed the consolidation of the whole nation. Israel is an example for all small nations who wish for long-lasting stability,” Kvirikashvili stated.

The Prime Minister stated that various important visits were being planned between several ministries of Israel and Georgia in the coming months.

I think Israeli’s high technologies are very needed for Georgia. I believe that our cooperation for security may also turn very important,” Kvirikashvili added.

The Georgian PM repeated he invited Netanyahu to Georgia and "we should wait for his visit, that will be allegedly followed by many visits of businesspeople.”