Georgia will have another big and multifunctional tourist zone at one of the country’s most unique monuments, the Enguri River dam, which will become a "world-class attraction”.

The Head of the Government of Georgia, Giorgi Kvirikashvili is convinced that, based on its uniqueness, the Enguri tourist zone will definitely become a Georgian tourism landmark.

At the presentation of the concept of the Enguri hydro power plant (HPP) tourist zone yesterday, Kvirikashvili said that a similar project could only be found in the United States. He mentioned US-based Hoover Hydro Power Plant, where there is also a significant tourist complex.

According to preliminary calculations, the tourist zone will receive about 400,000 tourists each year.

The tourist zone will cover 157 hectares of area and it will include a scientific center, open concert space, components for extreme sport and other facilities.

New tourist infrastructure will also be built at the site to encourage more local and foreign visitors. This new infrastructure included a visitor centre, museum and high lookout spots that overlooked Enguri River.

Development plans also showed that tourists could soon venture deep into the dam via 280 meters elevator, giving them access to parts of the dam previously only open to workers.

The investment cost of the construction costs is about 50 million GEL. The negotiations with the private investors are underway. The project designing will take one year after which the construction-infrastructural works will begin. In about five year we will have completed high quality touristic centre,” said Kvirikashvili. 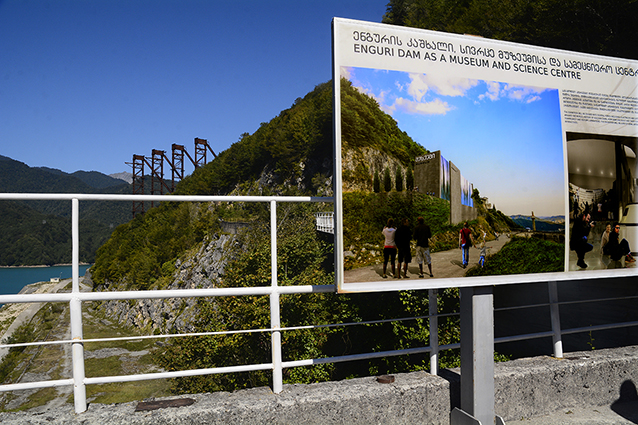 A museum, tourist centre and lookout spots will soon be built overlooking Enguri River. Photo from Gela Bedianashvili/Ministry of Culture and Monument Protection of Georgia.

The dam is located near Georgia’s north-western town of Jvari, and was last year added to the list of the country’s most distinguished cultural heritage sights and officially granted the status of National Monument.

Enguri dam is an interesting place in Georgia as it lies on the administrative boundary separating Georgia from its occupied Abkhazia region. The dam is part of the Enguri Hydro-Electric Power Plant.

In a unique division, the dam is located on Georgian-controlled territory while the underground station of the power plant - serving to generate electricity - is on the other side, under Abkhazian control. Because of this it is jointly operated by staff from both sides of the Administrative Boundary Line (ABL).

Georgia has very strict position that people living in Abkhazia should be supplied with the electricity generated by Enguri HPP. This gesture says much and this is a message for our Abkhazian brothers. We can use the Enguri HPP as an example of how we can replace the fractured relationships by war with cooperation around common interest,” said Kvirikashvili. 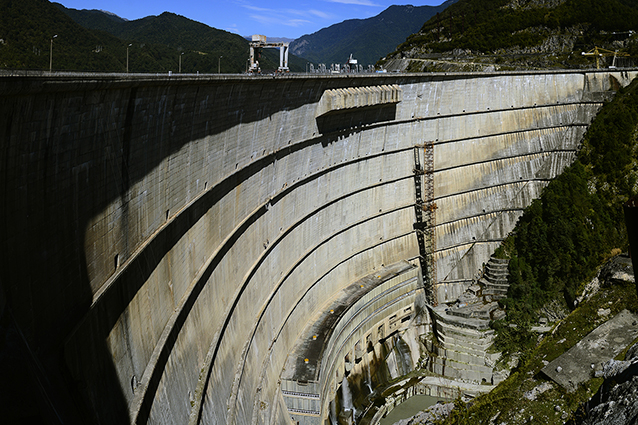 The Enguri dam reaches 271m high and 728m wide. Photo from Gela Bedianashvili/Ministry of Culture and Monument Protection of Georgia.

Recognised as the largest hydroelectric plant in South Caucasus, the Enguri power plant is a sprawling complex built on an area of nearly 1,000 km2, from Jvari town to the Black Sea.

The electricity generated by the dam goes back into grids in Abkhazia, while it also serves nearly half of Georgia's hydro energy requirements.

Construction of the Enguri dam began in 1961 and at the time was unprecedented for its scale and ambition.

Completed in 1977, the dam was the final result of a half-century process initiated by Georgian public figure Niko Nikoladze (1843-1928) just before World War I. Aiming to find ways to use Georgia's rich hydroelectric potential, Nikoladze invited engineers from St. Petersburg, Russia to study the feasibility of building a plant on Enguri River. 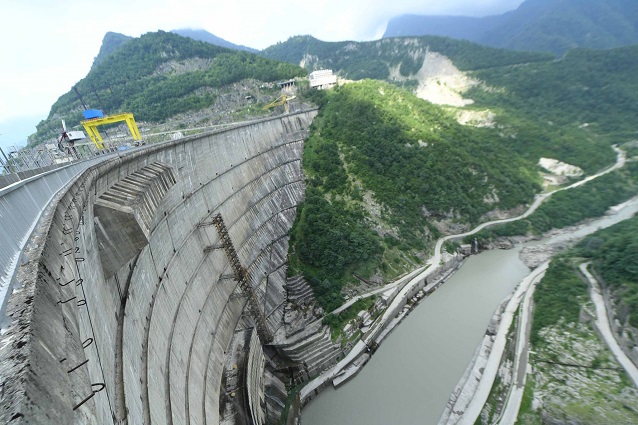 Development plans also showed that tourists could soon venture deep into the dam via 280 meters elevator, giving them access to parts of the dam previously only open to workers. Photo source: Kakha Kaladze/Facebook.

Their efforts, as well as a number of follow-up projects over the following decades by independent experts and Soviet-era planners were deemed unfeasible due to financial and practical considerations, before the 1961 project received the green light from authorities.

The final Enguri dam construction was the largest-ever industrial project in Georgia, with the finished plant attracting attention of international experts and global engineering publications over decades during the Soviet era.

Involving a specially created mix of concrete building material, the building was the largest arched hydroelectric dam in the world until a construction of a larger dam project in China began in 2012.