Ambassador of the European Union (EU) to Georgia Janos Herman believes Georgia has never been so close to Europe as it is now.

Attending the official launch of an EU-Georgia relations awareness campaign today, Georgian Prime Minister Giorgi Kvirikashvili praised the efforts of the campaign to bring Georgia and its people closer to Europe.

The €150,000 campaign comes as part of the EU-funded Facility for the Implementation of the Association Agreement in Georgia project. The campaign aims at raising public awareness on EU-Georgia political and economic relations and the benefits the country will receive.

The six-month campaign will be carried out in several stages through direct and indirect communication promoting European values. This includes but is not limited to exhibitions, video clips, success stories, competitions and other forms of communication that better explain the values Georgia and Europe have in common. 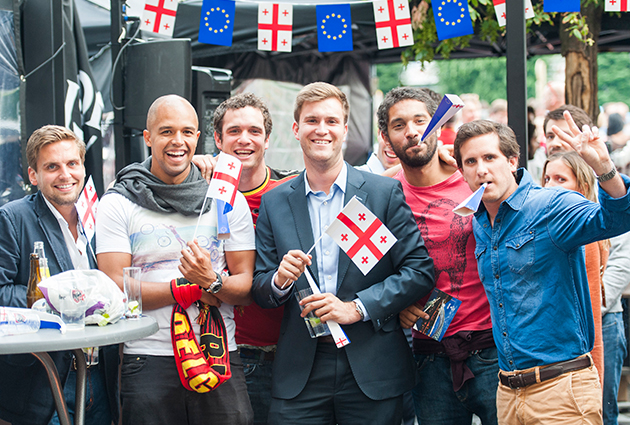 Celebration of the EU-Georgia Association Agreement in Brussels, Belgium on June 17, 2014. Photo by the Georgian PM's press office.

Kvirikashvili said Georgia, with its "ancient history, culture and rich traditions” is approaching a "free and independent European family”. The PM believes Georgia will contribute to diverse European culture and strengthen its peace and security.

He further positively assessed the reforms Georgia has been carrying out under the Georgia-EU Association Agreement (AA) which was signed on June 27, 2014.

Prime Minister said "as anti-Western propaganda keeps growing” it is important that people receive truthful and comprehensive information on Georgia’s path towards Euro-integration.

Our citizens should have as much information as possible on EU-Georgia political and economic relations. They should be aware how each of us could benefit from the AA and. . .visa-free travel”, Kvirikashvili said.

He said the role of the Office of the State Minister of Georgia on European & Euro-Atlantic Integration and the NATO-EU Information Centre would be important in the successful implementation of the campaign.