Georgia’s Interior Ministry has launched an investigation into the " alleged unlawful imprisonment” of an Azerbaijani journalist who vanished on Monday from Tbilisi and resurfaced on Tuesday in custody in Baku.

The official statement of the Ministry regarding the launch of the investigation came in parallel with a rally in support of the Azerbaijani journalist in front of the Government Administration’s building in Tbilisi late this morning.

The statement said Georgia is in communication with the Azerbaijani side regarding the case and "as soon as the factual circumstances are established, the public will be provided with detailed information.

Freelance investigative journalist Afgan Mukhtarli was reported missing by his wife in the Georgian capital of Tbilisi on the evening of May 29. The next morning, on May 30, regional media reported that Mukhtarli ended up in the custody of the Investigative Unit of the State Border Service of Azerbaijan.

According to Amnesty International, Mukhtarli and his wife had gone into exile in Georgia in 2015 amid fears for their safety over his investigations into Azerbaijani President Ilham Aliyev’s alleged links to corruption.

Amnesty International said in a statement yesterday that Mukhtarli is at risk of torture and other ill-treatment in Baku.

"This is a deeply sinister development in a country known for its long crackdown on journalists and human rights defenders. Afgan Mukhtarli must be immediately and unconditionally released and protected from torture and other ill-treatment. He is a prisoner of conscience detained solely for his work as a journalist”, said Levan Asatiani, Amnesty International’s Campaigner on the South Caucasus, who is currently in Tbilisi.

"Azerbaijan's crackdown on independent reporting has forced many journalists into exile. Forcefully returning them to Azerbaijan is a further sign of the country's hostile behavior to the press". 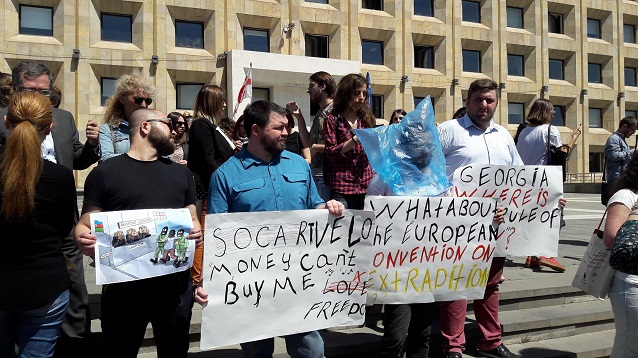 A rally in Tbilisi in support of Afgan Mukhtarli. Photo source: Temo Kiguradze/Facebook

Today’s rally in front of the Government Administration building in Tbilisi had the same request. Journalists and human rights activists demanded Georgia to answer the question how the man who disappeared in Tbilisi ended up in Baku without his identification documents with him. Mukhtarli’s wife told journalists that he had his passport at home in Tbilisi.

Head of the Georgian State Security Service Vakhtang Gomelauri said that according to the information Georgia received from the Azerbaijani side, Mukhtarli was detained not at the official crossing point but between the crossing points at the so-called "green border”, where a passport is not needed.

According to Amnesty International, Mukhtarli’s lawyer managed to speak with him briefly yesterday. In the lawyer’s words, Mukhtarli was abducted in Tbilisi by plain-clothed men who spoke Georgian. The men tied up the journalist in a car, took him to the outskirts of Tbilisi and beat him relentlessly. They then changed cars twice before taking him across the border to Azerbaijan.

The journalist is charged with illegally crossing the border and contraband, according to the lawyer, who said that Mukhtarli told him that the police planted €10,000 ($11,200) in his pocket while he was unconscious.

Mukhtarli’s family alleges that Georgian authorities could also be complicit in his abduction and forced return to Azerbaijan. His family told Amnesty International that he has often been followed by Azerbaijani-speaking men on the streets of Tbilisi, indicating that he has been under surveillance for some time.

"Georgia must promptly and impartially investigate what happened and hold accountable all those involved in this gruesome operation”, said Amnesty International’s Levan Asatiani.

Georgian Public Defender Ucha Nanuashvili also called on for a prompt and transparent investigation of the case.

"The state of Georgia should fully ensure the protection of rights of each person residing on its territory. Processes that are taking place in a neighbouring country should not affect the respect of human rights in Georgia”, Nanuashvili said.