A popular tourist attraction in Estonia, dubbed the Leaning House of Tartu, is hosting an international group exhibition detailing the Georgian tradition methods of refurbishing and fixing.

From tomorrow the work of six Georgian artists and one creative collective will be on show within the display Aesthetics of Repair in Contemporary Georgia at the Tartu Art Museum.

The museum’s description of the event read the exhibition will examine the "practices of refurbishing and fixing in its multiple dimensions" and seek to visualise the local cultural phenomena of unfinished repair initiatives as well as "personal notions of craftsmanship and care". 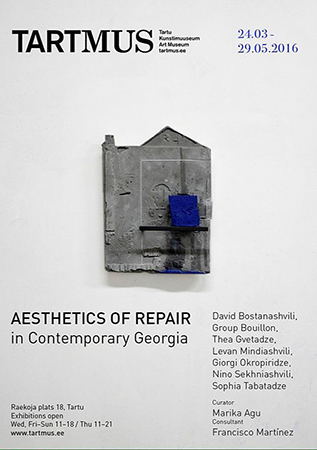 The poster for the exhibition Aesthetics of Repair in Contemporary Georgia. Photo from the Museum/Facebook.

Tomorrow’s opening day of the exhibition will also see the Group Bouillon’s six members present a performance that will remain within the display as an art installation.

The selected works were curated for the display by Marika Agu.

Meanwhile, on March 26 visitors to the Tartu exhibition will be able to enjoy a presentation of a book about "social dynamics and material culture" in contemporary Georgia.

The Aesthetics of Repair in Contemporary Georgia exhibition will run until May 29, 2016.

The Tartu Art Museum was established on November 17, 1940 and is currently housed in the city’s famous ‘leaning house’.

The building, called by some as the Pisa Tower of Tartu, was built next to the medieval city wall in 1973. One side of the house is supported by the old city wall and the other side by poles, hence why the house is on a lean.

As well as being the permanent home of the Tartu Art Museum, the classical building also hosts concerts and lectures.