Georgia’s President Giorgi Margvelashvili has named the country’s Deputy Minister of Defence as his candidate to become the latest judge of the Supreme Court of Georgia.

Margvelashvili revealed his nomination this evening after Parliament of Georgia suspended Levan Murusidze from his duties as Supreme Court judge, as he was recently elected a Court of Appeals judge and could not hold both roles.

The President said his pick, Anna Dolidze, had always been distinguished for her "high professionalism and continued fight against injustice”. The President particularly praised Dolidze’s efforts to establish the truth in the notorious Girgvliani murder case under the previous state leadership.

I am sure Mrs. Anna will manage to preserve her values and attitudes in her new, very responsible position and successfully protect them,” said Margvelashvili this evening.

There are 16 Supreme Court of Georgia judges who are elected for a 10 year term.

Dolidze, who enjoyed a successful domestic and foreign career, said being a judge of the Supreme Court of Georgia was every lawyer’s dream. 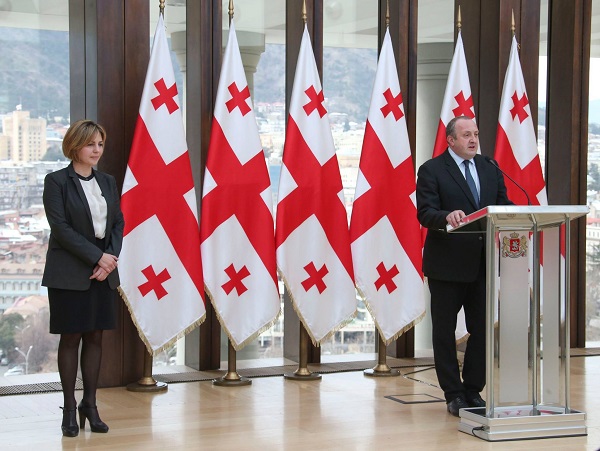 I returned home to Georgia one year ago with the aim of serving my country. I accepted the President’s offer with great pleasure and hope my vast experience and scientific activeness will help Georgia’s court system,” Dolidze said.

She stressed it was crucial the country attract and retain qualified staff in the country’s efforts to reform its justice sector and provide a high-level court system.

She was appointed to the role of Georgia's Deputy Minister of Defence in May 2015. Earlier, from 2004 to 2006 Dolidze served as the head of Georgia’s Young Lawyers’ Association (GYLA).

Now Parliament of Georgia must decide whether to accept Dolidze, President Margvelashvili’s candidate, to the vacant Supreme Court judge position. To be successful Dolidze must gain 76 votes out of the 150-seat Parliament.