One day after it was announced Georgia's Defence Ministry would reintroduce compulsory military conscription, authorities have spoken out about the reasons why this came to be and how it would be "absolutely different" from the previous mandatory conscription scheme in Georgia.

Compulsory military was abolished by ex-Defence Minister Tinatin Khidasheli in June 2016 however yesterday Defence Minister Levan Izoria confirmed it would be reintroduced.

Today in a statement the Ministry of Defence stressed the resumed conscription would be "absolutely different” from the system that previously operated in Georgia.

After one year of service conscripts will have a chance to automatically enroll in a contract-based military service with a high salary,” the Ministry said today.

The new monthly pay for conscripts would be $21 instead of $3, which it was previously. 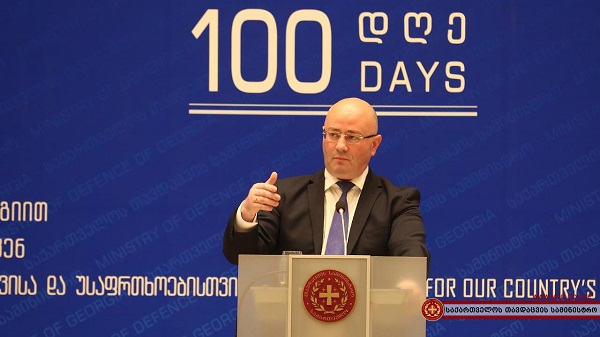 Defence Minister Levan Izoria presents a 100 day report about the role of the Ministry after being appointed the role in August 2016. Photo by Defence Ministry's press office.

Why is Georgia bringing back mandatory conscription to the Ministry of Defence?

The Ministry stressed the decision to resume compulsory military conscription was made after "active consultations with NATO and American experts.”

The statement said changes were planned within the General Staff of Georgia's Armed Forces, in Land Forces, Aviation and Air Defence Commands.

Furthermore, in future military police investigations, intelligence and enforcement functions will be separated, the Ministry announced.