Nine years on from November 2007 political crisis in Georgia

Nine years have passed since the people of Georgia experienced a day regarded as the worst political crisis in Georgia in 14 years.

On November 7, 2007 a series of anti-government protests took place across Georgia and ended with protesters being dispersed by police who used tear gas and water cannons.

A total of 508 people were taken to hospital when riot police dispersed thousands of protesters in various parts of capital Tbilisi. 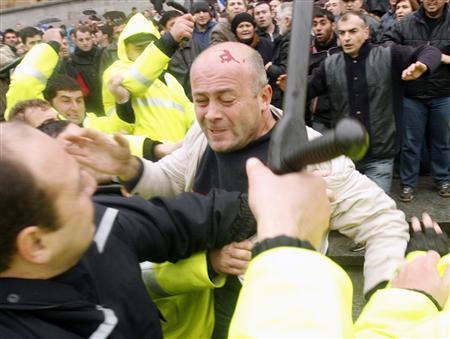 Protesters clash with police during a rally in front of Parliament Building in Tbilisi on November 7, 2007. Photo from REUTERS/David Mdzinarishvili

Demonstrations started on September 28, 2007. It peaked on November 2 when up to 100,000 people gathered in front of Parliament Building in central Tbilisi. Protesters urged then-president Mikheil Saakashvili to step down. The protests were organised by a coalition involving major oppositional political parties. 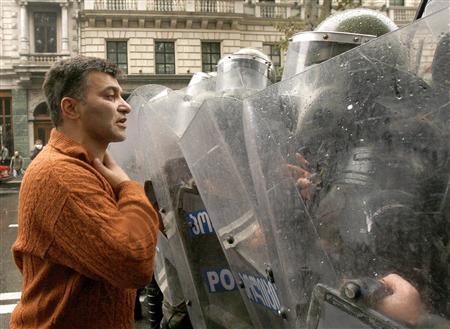 An opposition supporter speaks to police during a rally in front of Parliament Building in Tbilisi on November 7, 2007. Photo from REUTERS/David Mdzinarishvili

At the time Saakashvili accused the Russian Secret Service of being involved in an attempted coup d’etat. He declared a nationwide state of emergency that lasted for 15 days.

Police use water cannons to disperse the protesters in front of Parliament Building in Tbilisi on November 7, 2007. Photo from REUTERS/David Mdzinarishvili

Earlier on November 7, 2007, riot police attacked Tbilisi-based Imedi TV while a news program was being broadcast live on air. Police officers in masks and carrying assault rifles were seen sealing off the office. The broadcaster, which the then-government claimed was biased and pro-opposition, was subsequently switched off. 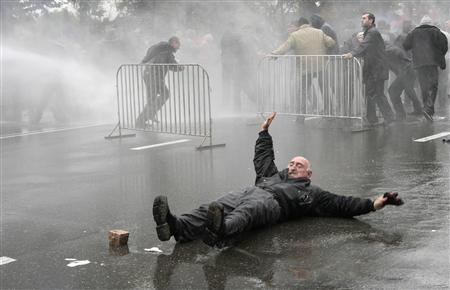 An opposition supporter lies on the road during clashes with police in central Tbilisi November 7, 2007. REUTERS/Sergo Belousov

The next day Saakashvili announced an early Presidential Election for January 5, 2008, as a compromise to the solution. 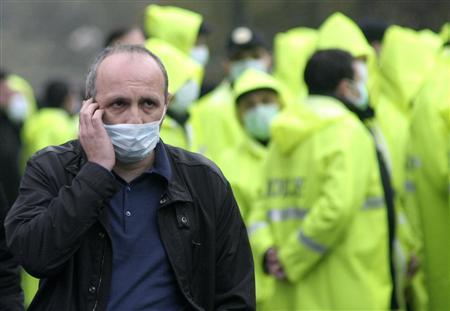 When photos of the rally dispersal spread around the world, the international society criticised Saakashvili’s government for using heavy-handed tactics against protesters.

They evaluated November 2007 as the worst political crisis in Georgia since the Rose Revolution in 2003.