The five political figureheads announced the news today but did not specify their future intentions or activities.

The Free Democrats key people who stepped down today are:

All of the statements made by outgoing Free Democrats party members noted their decisions to leave the party was related to the party's failure to gain enough support and votes to overcome the five percent threshold in the October 8 Parliamentary Elections in proportional voting.

Preliminary results from Georgia’s Central Election Commission (CEC) showed Free Democrats received 4.61 percent of votes. The party still had a chance to gain one seat in Parliament as one Free Democrats candidate was due to participate in the second round of majoritarian voting in Chiatura region in the country's west.

[By departing] we are opening the way to new people in the party who, with their enthusiasm and motivation, will advance and develop the party,” Abashidze said.

It was a free decision made by free voters and we should respect the voters’ choice,” Dolidze said. 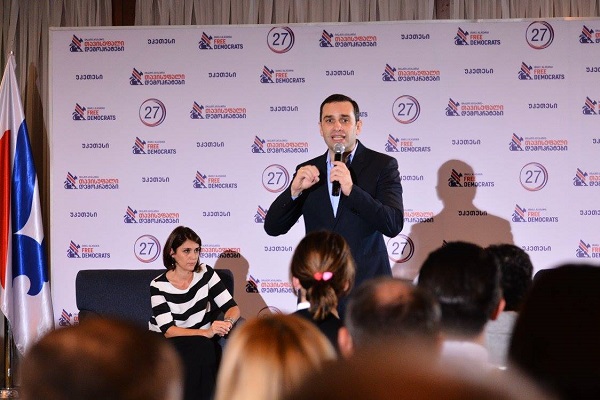 For the next two months Dolidze would continue his duties as head of Georgia’s delegation in the Euronest Parliamentary Assembly and would continue fighting to prove the innocence of the Cable Case convicts.

Outgoing members Onoprishvili and Tsagareishvili said they had always stood by Georgia's interests and would continue their activities in service of Georgia.

More about the people who quit the FD today:

Meanwhile the remaining members of Free Democrats said they would continue their political fight and prepare for the 2017 local elections.

Free Democrats was part of the Georgian Dream coalition, founded by ex-Prime Minister Bidzina Ivansihvili prior to 2012 Parliamentary Elections, to defeat the nine-year rule of the United National Movement.

Free Democrats quit the coalition in 2014 when Alasania was dismissed as Defence Minister and moved into the  parliamentary opposition. The party participated separately in this year’s Parliamentary Elections.