Irakli Alasania, Georgia’s former Minister of Defence and leader of opposition party Free Democrats, has made an announcement he is temporarily leaving politics.

Several minutes ago Alasania announced he had removed himself as a majoritarian candidate in eastern Gori district, where a second round of elections was due to take place between himself and a Georgian Dream candidate Ioseb Makrakhidze.

In a special press briefing today, Alasania did not specify the field of his future activities but stressed his party, Free Democrats, would "relaunch itself and be well prepared for the 2017 local-government elections”.

The Free Democrats party received 4.61 percent of votes in Saturday’s Parliamentary Election in Georgia. The party failed to overcome the five percent threshold and gain the needed amount of votes to get a seat in the next Parliament.

Alasania said a critical eye was needed to determine why the party failed to gain support, and he thanked those who had voted for Free Democrats on Saturday.

I want to whole heartily thank each of our voters, every citizen for their support, especially the people of Gori. However I won’t participate in the second round of elections as my promises given to the Gori people were related to my team’s activities in Parliament,” Alasania said. 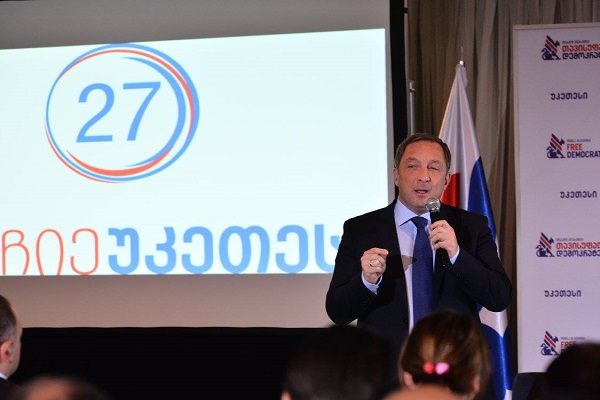 Shortly before Alasania’s statement, one of the main figures of the Free Democrats party, Georgia’s ex-Minister for European and Euro-Atlantic Integration Alex Petriashvili, announced he had quit the party.

I don’t belong to any party now and I will continue serving Georgia in some other way,” Petriashvili said on his Facebook page.

Alasania, 43, is a soldier and former diplomat and served as Georgia’s Minister of Defence from 2012 to 2014 under the current Government of Georgia. He was dismissed by ex-Prime Minister Irakli Garibashvili in November 2014 for his statements about Georgia changing its foreign orientation.

Alasania was Georgia’ Ambassador to the United Nations from September 2006 to December 2008, under the previous United National Movement (UNM)-led government. Due to a conflict with ex-president Mikheil Saakashvili’s administration, Alasania withdrew into the opposition and founded the Free Democrats party in July 2009.

The Free Democrats was part of the Georgian Dream coalition founded by ex-Prime Minister Bidzina Ivansihvili prior to 2012 Parliamentary Elections, to defeat the nine-year rule of the United National Movement.

Free Democrats quit the coalition in 2014 when Alasania was dismissed as Defence Minister. The party participated separately in this year’s Parliamentary Elections.