Georgia is maintaining a strong presence in NATO's peacekeeping mission in Afghanistan as another unit of the Georgian Armed Foreces (GAF) were farewelled to begin their service in the Middle East.

Earlier today a special ceremony took place at Tbilisi's Shota Rustaveli International Airport where troops of the 32nd Battalion of the Georgian Armed Forces (GAF) heard words of gratitude from officials during their official send-off before departing for their impending peacekeeping service.

At the ceremony Georgia’s Minister of Defence Levan Izoria stressed the professionalism and heroism of Georgian soldiers and he underscored the importance and share of Georgian peacekeepers in ensuring the security in Afghanistan and globally. 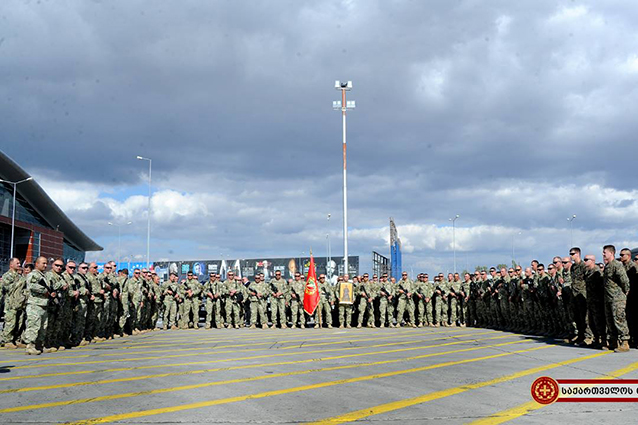 The Battalion lined up at the Tbilisi Airport along with their US counterparts before departing for Afghanistan. Photo from the Ministry of Defence of Georgia's press office.

By serving in this mission, [the troops involved] take the duty of protecting the security of their homeland beyond its borders. We appreciate their contribution very much," Izoria said.

The departing unit will relieve the 52nd Battalion of the GAF and continue providing security for the Bagram Air Base in Afghanistan’s Parwan province.

Before taking over the duties in Bagram, soldiers will undergo final training at the base under the watchful eyes of Georgian and United States (US) Marine Corps instructors. 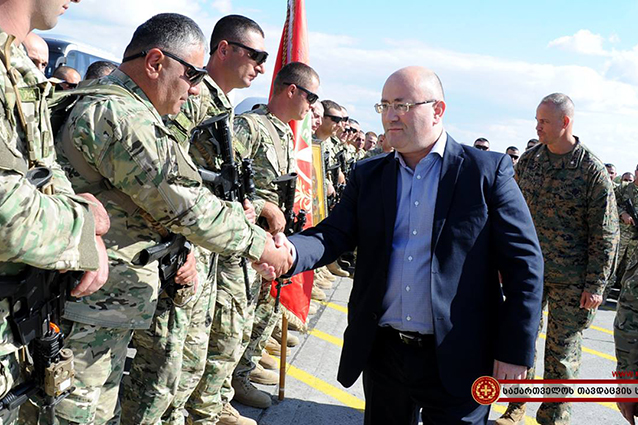 The 32nd Battalion completed initial mission training in Georgia, followed up by exercises at military bases in Germany.

The unit will serve as peacekeepers for several months and join the recently departed GAF units in the Georgian contingent within NATO's Resolute Support mission.

The mission launched in early 2015 as a follow-on task from the International Security Assistance Force (ISAF) mission, to which Georgia contributed about 750 troops.

Currently Georgia is the largest non-NATO contributor to the Resolute Support mission, with 885 troops involved in the deployment.