Stoltenberg tells President Margvelashvili:
“Bonds between NATO and Georgia are stronger than ever”

This afternoon NATO Secretary General Jens Stoltenberg met Margvelashvili at the President’s residence in the heart of capital Tbilisi, where he said "the bonds between NATO and Georgia are stronger than ever”.

Stoltenberg praised Georgia’s efforts to improve its democracy, rule of law and judiciary and he encouraged the country to continue implementing fundamental reforms to prepare for alliance membership.

We are impressed by the magnitude, speed and determination [Georgia] has shown in implementing important reforms and for your efforts to become a member of the alliance,” Stoltenberg said.

These reforms are most important for Georgia itself but they also help to prepare Georgia for NATO membership. This will take time and it will require patience,” Stoltenberg added. 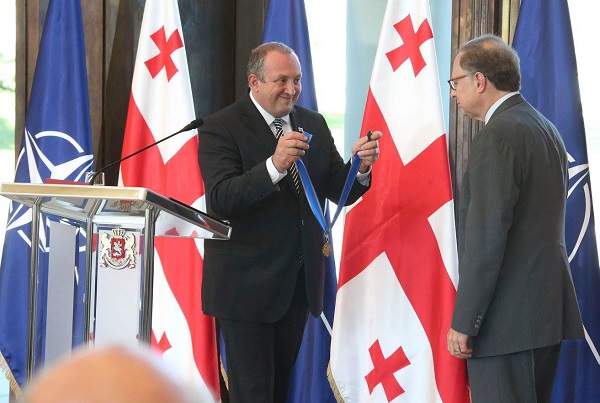 NATO Deputy Secretary General Alexander Vershbow said he was ‘very proud’ to be awarded a special state Order. Photo by the President's webpage.

He and Margvelashvili spoke about Georgia’s role in ensuring world peace. Stoltenberg praised Georgia for its important contributions to NATO’s operations and activities and he added the alliance was "closely following” the security situation in Georgia’s two de facto regions Abkhazia and Tskhinvali (South Ossetia).

President Margvelashvili reiterated the strong cooperation between Georgia and the alliance regarding security in the Black Sea and he stressed safety in this region "was directly linked to welfare and security of the united and integral Europe.”

Meanwhile Stoltenberg could not give a date when Georgia would be offered NATO membership but he said the alliance was committed to helping Georgia move towards this goal through the NATO-Georgia Commission and the Substantial NATO-Georgia Package.

We look forward to the upcoming elections meeting the highest democratic standards because, as a community of values, NATO puts a premium on democracy, human rights and the rule of law,” he said.

President Margvelashvili evaluated the Georgia visit of Stoltenberg and the NAC as a "very important message of support and cooperation” and stressed Georgia had "all practical instruments that would prepare the country for the NATO membership.”

At the end of the meeting President Margvelashvili awarded NATO Deputy Secretary General Alexander Vershbow with the Order of the Golden Fleece for his special efforts to strengthen Georgia’s sovereignty, deepen Georgia-NATO relations and contribution to Georgia’s Euro-Atlantic integration.

Vershbow replied that he was honoured to receive the state award, particularly as it was awarded to him the same year as Georgia marked the 25th anniversary of its independence.