On the eighth anniversary of the Russia-Georgia war, the Speaker of Parliament of Georgia says the Government cannot comprehensively investigate the clash as Georgia has no diplomatic relations with Russia – the nation that initiated the aggression on Georgian soil.

We have results from our local investigation about the war.  It can be said the investigation was unofficial, [and it was] carried out mainly by experts and non-governmental organistaions in 2008 and 2009,” Parliament Speaker David Usupashvili said.

He believed the investigation could provide "very important evidence” for international institutions who are investigating the war, in reference to the current investigation of the International Criminal Court (ICC) of the Russia-Georgia war which shook Georgian soil in August 2008.

In the international arena, generally speaking these investigations take years to be completed and we must understand this.”

The Government of Georgia lacks opportunities to comprehensively investigate the war as we have no diplomatic relations with Russia – the country that initiated the aggression and ethnic cleansing in Georgia,” Usupashvili stated. 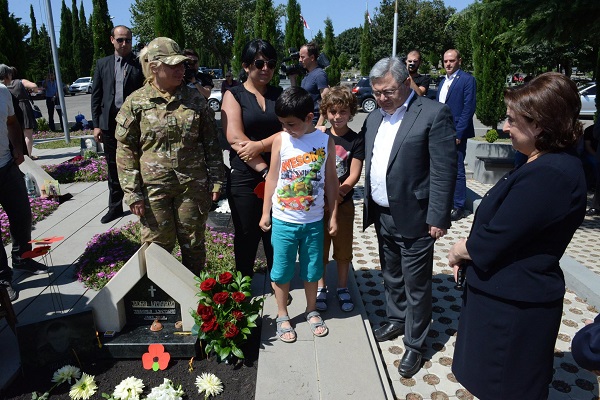 Parliament Speaker at the grave of a fallen soldier in the Russia-Georgia War. Photo by Parliament of Georgia.

He also said the international community "is not still ready” to adequately respond to the conflict, which occurred between Russia and Georgia eight years ago.

However it is very good the Georgian nation is unanimous and mobilised to defend its home country. We must stand together and take steps to defend our country,” said the Parliament official.

In this contest Usupashvili stressed the importance of Georgia’s fast integration into the North Atlantic Treaty Organisation (NATO).

We can’t or won’t reintegrate out lost territories through the army or NATO but we won’t be able to protect the rest of Georgian territories without the support of the Alliance and our allies,” Usupashvili said.

The war lasted five days and following the armed conflict 228 Georgian civilians, 170 soldiers and 14 police officers had lost their lives.

The war displaced 192,000 people in Georgia. Many were able to return to their homes after the war but as of May 2014 more than 20,200 people remain displaced.