A visa liberalisation decision for Georgia will be taken in favour of the country in combination with a suspension mechanism, says German Chancellor Angela Merkel.

Merkel and Georgia’s Prime Minister Giorgi Kvirikashvili met in Berlin this afternoon before the pair summed up their conversation for media.

At the press conference, the German leader stressed the European Commission had prepared a positive report for Georgia regarding its visa liberalisation to the EU and Germany welcomed this step.

"The Commission report said Georgia had fulfilled all of the criteria and of course Germany didn’t oppose this recommendation,” Merkel said.

"And in combination with the suspension mechanism, the [visa liberalisation] decision will be taken in favour of Georgia,” she added.

Merkel didn’t specify the date the EU would officially approve Georgia’s visa waiver but she said this would not take long.

The German official stressed a suspension mechanism was needed but it wasn’t due to Georgia. To explain this further she said: "In general if there are big difficulties and, for example, too many citizens of any country come here and ask for a political asylum – as it happened with Syria last year, and we don’t want such thing to happen again – we seek a suspension mechanism.” 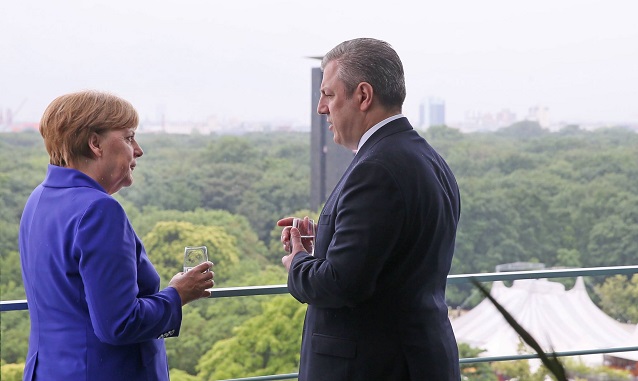 Georgia’s done a lot for "Europe to feel safe”

When Kvirikashvili addressed the media he spoke about the importance of visa liberalisation for Georgian citizens. He stressed easier travel to the European Union (EU) would open greater opportunities for Georgians and said Georgia had done a lot for "Europe to feel safe” in reference to several high-level visits between the two nation, the reforms carried out to advance the country and Georgia’s contribution to international peacekeeping missions.

"After signing the Association Agreement and Deep and Comprehensive Free Trade Area Agreement with the EU, short-term visa-free travel for Georgian citizens will be another important step forward in the direction of Georgia’s EU integration,” Kvirikashvili said.

To move closer to Europe, Georgia had implemented a lot of important reforms since 2013. This included:

Kvirikashvili was accompanied to Germany by Georgia’s Interior Minister and it was the Minister’s second visit to Germany this year. In March Georgia hosted the head of Germany’s Federal Criminal Police Office.

Kvirikashvili said these things had been done to ensure Europe felt safe as Georgia’s enjoyed visa-free travel to the EU.

At the press conference the German Chancellor praised Georgia for its successful reforms implemented in recent years to advance the country.

"We are following with interest the ongoing economic reforms and economic liberalisation in Georgia,” Merkel said.

"I think German companies don’t know yet what great success Georgia has achieved.”

"Looking at world rankings about competitiveness and transparency, Georgia has had amazing successes.”

The German leader also praised the implementation of the EU-Georgia AA deal and noted this process had already shown positive results, especially in increasing business contacts between Georgia and the EU states.

Merkel noted Georgia had progressed a lot and she voiced Germany’s support for Georgia’s territorial integrity.

"We are happy that Georgia takes very pragmatic steps regarding Russia, but the main issue remains unchanged; we, Germans, support Georgia’s territorial integrity, and in "territorial integrity” we mean South Ossetia and Abkhazia,” the German leader said.

She added Georgia was on a "very ambitious road” towards the West and said: "Germany will be your friend and a good partner on this journey”.

This afternoon the two high officials welcomed Georgia’s announcement that 2017 would be the Year of Georgia-Germany Friendship.

Kvirikashvili said within this initiative, many events would be planned and he invited Merkel to Georgia "to celebrate the Georgia-Germany Friendship Year together”. 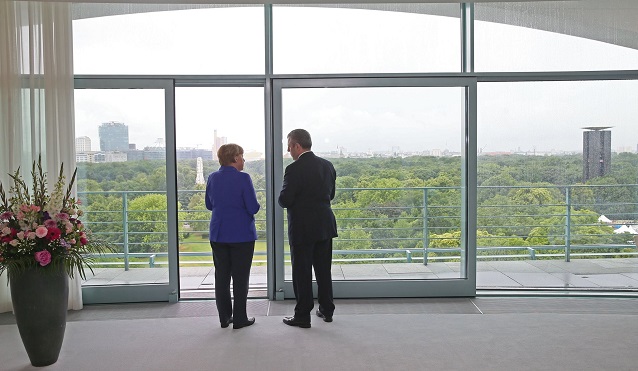 Kvirikashvili also stressed Georgia was a popular destination for German tourists and to further boost ties between the two nations, new flights travelling directly between capital cities Tbilisi and Berlin would start operating from September 2016.