Led by US Army Europe Commander Lieutenant General Ben Hodges, the delegation featured officers of the US Army and other NATO countries. 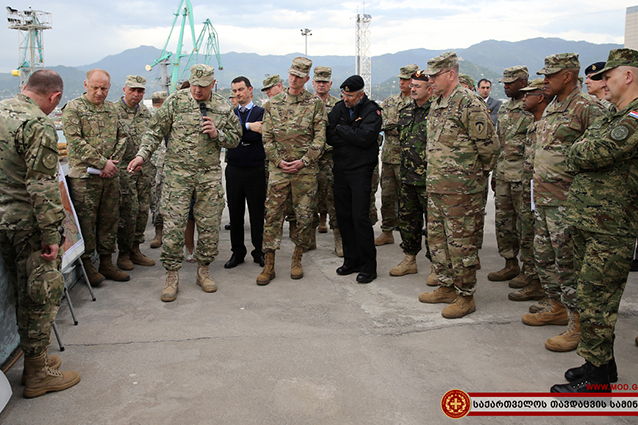 The arriving delegation also visited the Batumi Port to familiarise themselves with its infrastructure. Photo from Ministry of Defence of Georgia.

The delegation's main purpose was to study logistical capabilities of the Batumi Port in frame of their mission to collect information on infrastructure and capacity of Black Sea naval ports.

The group were also tasked to prepare for the expected arrival of American heavy equipment at the Batumi Port, which will be used in the Noble Partner joint exercise in May.

Batumi Port was designated to be the unloading point of heavy tanks from a company-sized US Army unit that will take part in the 2016 Noble Partner drills at the Vaziani Training Area, located 20km outside capital Tbilisi.

Following their arrival the NATO military commanders visited Batumi Port to familiarise themselves with its infrastructure.

Lieutenant General Hodges told reporters his visit also aimed to demonstrate that the US would continue cooperating with Georgia to improving the interoperability between militaries of the two countries.

The Noble Partner exercise will be held in Georgia for the second time. Last year the drills were also held in May and at the time the US military service members also took part in the celebration of Georgia's Independence Day on May 26.