The life and legacy of a pioneering Georgian photographer and the story of his unique 19th Century museum-on-wheels will be presented among a special collection of historical items at the Museum of Georgia in capital Tbilisi starting next week.

Exhibits of Caucasian, Islamic, Asian and European cultures will be presented from December 21 for five weeks in exhibition titled The Travelling Museum of the Caucasus. The event will pay homage to the man known as the founder of Georgian photography – Alexandre Roinashvili (1846-1898) – and his fruitful lifelong work on heritage preservation.

Tbilisi guests will be able to see Roinashvili's collection of photographs, military equipment and antiquities dating back to the 7-9th centuries, which he collected during the late 19th Century and displayed to audiences all over the Caucasus via his traveling museum. 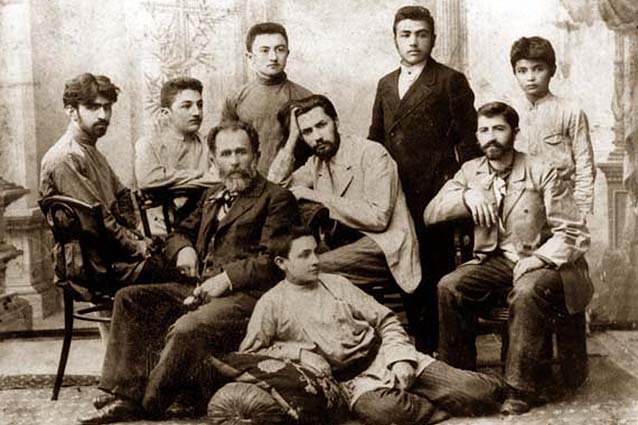 Photographer and museum owner Alexandre Roinashvili (seated, third from left in a dark suit) surrounded by his students.

The five-week exhibition will also include the presentation of a new book The First Georgian Photographer and his Museum about Roinashvili's life and work.

The items within the exhibition will be collected from the four Tbilisi museums that currently preserve and house them; the Simon Janashia Museum of Georgia, Shalva Amiranashvili Museum of Fine Arts, Ioseb Grishashvili Tbilisi History Museum (also known as Karvasla) and the State Museum of Folk and Applied Arts of Georgia.

Born in Dusheti town in Georgia's east, Roinashvili moved to Tbilisi at the age of 14 to work and study at the studio of painter and photographer Teodor Khlamov, who at the time was one of the few masters of the newly established photographic art form.

Gaining recognition for his photographic portraits and landscapes of 19th Century Tbilisi locations, Roinashvili is today regarded as the founder of Georgian photography.

While roaming around the country and the greater Caucasus for inspiration, Roinashvili began collecting antiquities which helped him to gain a greater understanding of the culture and lifestyle of the people of the region. Intending to establish a Georgian national museum, he acquired items of cultural significance on his travels and organised exhibitions to showcases his pieces.

In 1887 he crowned his lifelong work on culture and heritage by creating The Travelling Museum of the Caucasus - a unique travelling exhibition of Caucasian cultural heritage, before taking it to cities of Imperial Russia including Saint Petersburg and Moscow.

The Tbilisi exhibition at the Museum of Georgia will continue until January 30.