A small art gallery in Georgia’s capital is hosting an exhibition of medieval artefacts discovered during an archaeological dig at a historical Georgian monastery in Cyprus.

TBC Gallery is hosting an exhibition of items from the 10th Century Gialia Monastery.

The exhibition, which opened on December 5, included a display of artefacts made of ceramics and other materials, wall painting fragments and coins.

The items were preserved at the Archaeological Museum in Polis, Cyprus after their discovery during joint archaeological works by a Georgian team and archaeologists of the Cyprus Department of Antiquities Protection between 2006 and 2010.

Already the exhibition has been visited by a delegation of culture experts from Cyprus. The foreign guests attended the exhibition on December 4 after meeting with Georgia's Minister of Culture and Monument Protection Mikheil Giorgadze to discuss ongoing works at the Gialia Monastery site. 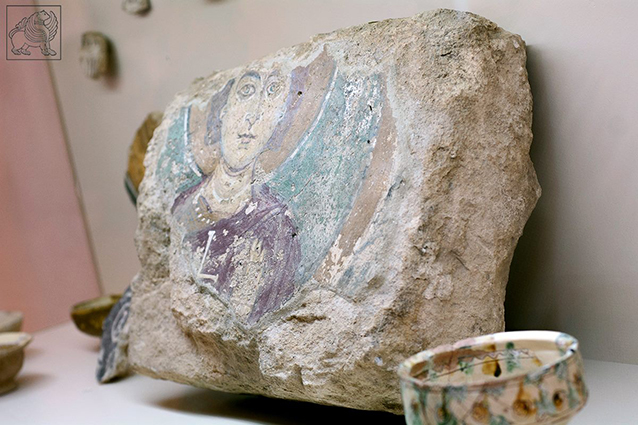 The items on display included fragments of a wall painting. Photo from Gela Bedianashvili/Ministry of Culture and Monument Protection of Georgia.

Remains of the Gialia Monastery were first discovered in 1981 however it was not until 2006 that excavation works of the ruins began. At the time archaeologists said their conservation work revealed the church was built in the 10th Century and remained in service until the late 16th Century.

Georgia’s Ministry of Culture said now the Gialia Monastery was considered the most thoroughly researched of all Georgian historical monuments located abroad.

Looking ahead plans were in place to carry out further excavations at the Gialia Monastery in 2016 after scientists revealed more artefacts could be discovered at the site, said the Ministry.

Built by Georgian King David III (963-1001 AD) in the 10th Century, the Monastery was very affluent, was protected by Georgian Kings and was mentioned in Medieval Georgian, Greek and Latin scriptures.

Between the 10-15th Centuries the Gialia Monastery had a manuscript division, where books were written and translated from Greek to Georgian.

The exhibition at TBC Gallery in Marjanishvili will continue until December 25.