Two Georgian wrestlers have made history by being Georgia’s first-ever winners at the Aikido World Championships in Feisch, Switzerland.

Vakhtang Sikharulidze and Ivane Bibilashvili won the competition’s Kata wrestling category, which featured two athletes from each nation, on October 26 after five days of tough competition.

About 300 wrestlers from all over the world took part in the multi-category competition, including from the United States, Japan, United Kingdom and France.

The Georgian team, who are current European Champions, were represented by four wrestlers at the tournament. 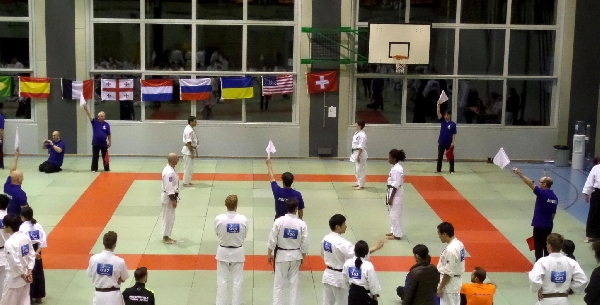 The competition featured about 300 wrestlers from across the world. Photo from Ministry of Sport and Youth Affairs of Georgia.

The Georgian squad boasted contest favourites Revaz Tskipurishvili and Giorgi Bekoshvili, however the duo were eliminated in the quarter-final stage of the competition.

All hopes were now on Sikharulidze and Bibilashvili to carry the Georgian challenge further. The duo overcame Dutch and British pairs in the quarter and semi-finals before facing and defeating Japan in the final bout.

Until now Georgia’s best result at a World Championship competition was third, which was won in 2009 at a competition in Japan, before the Georgians were crowned European Champions in 2014.

The Georgian wrestles’ next challenge will be defending their European title at the 2016 Championships in Valencia, Spain.