The high standards and professionalism of the Georgian soldiers on duty in Afghanistan were recognised on Monday at a special ceremony where officers and personnel were awarded medals by their American allies at the Bagram Air Base.

The ceremony involved service members of the IV Mechanised Brigade 43rd Battalion, on duty within the Resolute Support peacekeeping mission.

Both medals are awarded by the United States (US) Army in recognition of "heroic or meritorious achievement or service”. 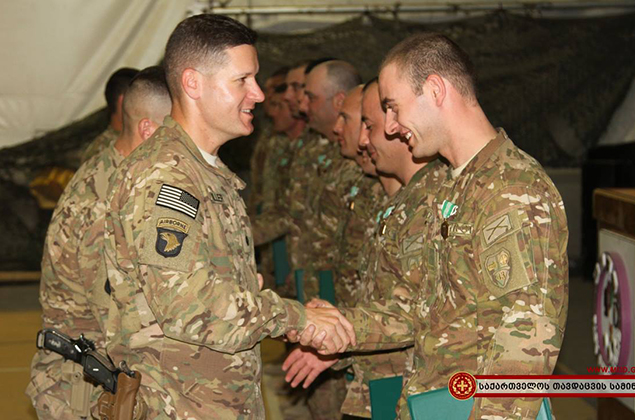 The Georgian service members were honoured by their United States Army colleagues. Photo by Ministry of Defence of Georgia.

The 43rd Battalion served alongside their coalition partners for the past seven months and are due to be relieved in the near future by the II Infantry Brigade 22nd Battalion, which received a fitting send-off ceremony in Georgia on September 30.

Units of the Georgian Armed Forces are serving in Afghanistan within the Resolute Support mission, to which Georgia is the largest non-NATO contributor with 885 troops.

The mission was a follow-on task from the International Security Assistance Force (ISAF) mission, to which Georgia contributed about 750 troops.