Next wave of Georgian soldiers embark on Afghanistan peacekeeping duties

The latest wave of Georgian soldiers to participate in the NATO-led Resolute Support international peacekeeping mission in Afghanistan have been farewelled in a poignant ceremony today.

For the next seven months personnel from three units – II Infantry Brigade 22nd Battalion, 23rd Battalion Alpha Company and a National Guard platoon – of the Georgian Armed Forces (GAF) will call Afghanistan home, as they carry out peacekeeping duties at Bagram Air Base in the Parwan province.

At Vaziani Military Base, just outside capital Tbilisi, the troops were given a fond send-off in front of officials, family members and friends. They will relieve the Georgian soldiers’ currently on duty and will serve on a rotation basis.

The departing units were addressed on the formation square by First Deputy Ministers of Georgia’s Defence Ministry, Chief of General Staff of the GAF and the new United States (US) Ambassador to Georgia Ian Kelly.

Deputy Defence Minister David Ebralidze underlined the belief that the Georgian Armed Forces served in international missions to "contribute to global security” as well as to protect Georgia. 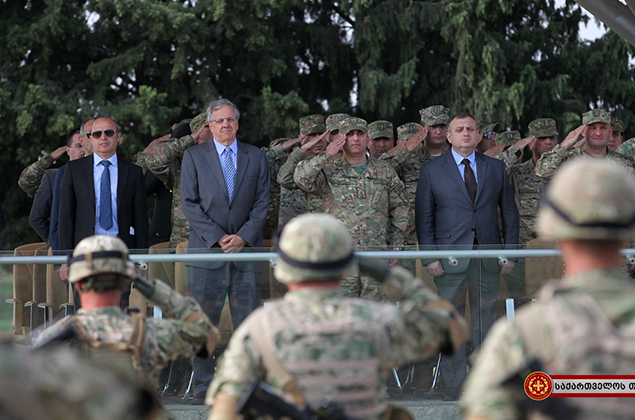 Among the officials to attend the ceremony was the new United States Ambassador to Georgia Ian Kelly (second from left). Photo by Ministry of Defence of Georgia.

Ambassador Kelly spoke at the ceremony and said the people of Georgia should be "extremely proud” of Georgian service members’ contribution to international peacekeeping missions, and noted the sacrifice of Private First Class Vasil Kuljanishvili, who was killed on September 22 while on duty within the Afghanistan mission.

Within the ceremony First Deputy Chief of General Staff of the GAF Brigade General Vladimer Chachibaia awarded Defence Ministry medals named after the late Georgian General Giorgi Kvinitadze to service members of the US Marine Corps for their share in development of military cooperation between Georgia and the US.

The outgoing GAF soldiers will be dispatched to relieve the Georgian units currently serving in the peacekeeping mission. For the next seven months the units will be tasked with maintaining security of Bagram Air Base and the Resolute Support mission headquarters in Kabul.

Official NATO figures stated Georgia committed about 885 troops to the Resolute Support mission, meaning the country remained the largest non-NATO contributor to Afghanistan. The Georgian troops are serving on a rotation basis.

The Resolute Support mission was a follow-on task from the International Security Assistance Force (ISAF) mission, to which Georgia contributed about 750 troops.