The memory of a Georgian soldier who died while serving in a peacekeeping mission in Afghanistan is being honoured in the United States (US), with the fallen serviceman being posthumously awarded a top US medal for his exemplary service.

A ceremony honouring late Georgian Private First Class Vasil Kuljanishvili and awarding him the Bronze Star Medal was held on Tuesday at the base of a legendary US Army unit – the 101st Airborne Division 3rdBrigade Combat Team (BCT) – at Fort Campbell in central-west US.

Kuljanishvili died in September while serving in the NATO-led Resolute Support mission.

Georgia’s Defence Attaché to the US Colonel Vepkhvia Chalabashvili and his aide Mirian Popkhadze represented Georgia at the ceremony and were presented the medal for Kuljanishvili. 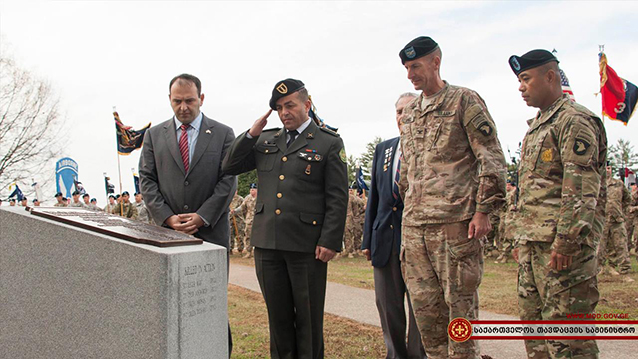 Kuljanishvili’s memory was honoured by a Georgian delegation and the US Army’s 3rd Brigade Combat Team command. Photo from the Ministry of Defence of Georgia.

The Bronze Star Medal was awarded to the fallen soldier for his "exceptionally meritorious service” within the Resolute Support mission, the award certificate read.

At the US Army base Kuljanishvili’s name was also carved into a memorial stone alongside the name of 3rd BCT service member Corporal John M. Dawson, who was killed in action in April while also serving in Afghanistan.

The ceremony to pay respect to the memory of the fallen soldiers included playing the national anthems of Georgia and the US and featured the 3rd BCT Commander Colonel J.B. Vowell, 101stAirborne Division Commander Major General Gary J. Volesky and Kentucky State Governor Steve Beshear. 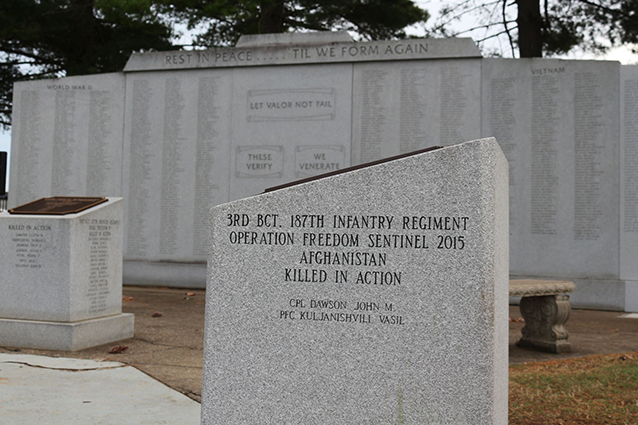 The fallen Georgian soldier’s name was carved in a memorial stone at Fort Campbell. Photo by Ray Howze/The Leaf-Chronicle.

Following the presentation of the awards Vowell and Chalabashvili addressed the audience and spoke about Georgia’s contribution to global security via international peacekeeping missions.

Kuljanishvili was killed in Afghanistan in September while serving in the Georgian Armed Forces (GAF) 4thMechanised Brigade alongside the 3rd BCT. Another GAF service member, Sergeant Paata Rostobaia was wounded at the same time but survived his injuries.

The ceremony at Fort Campbell was organised by the US Army’s 101st Airborne Davison, a famous unit recognised for its distinctive role for the allied forces during World War II.