The road leading to Georgia’s iconic Tusheti mountainous area has reopened after a powerful hailstorm and landslide caused major damage to the roads and nearby area.

The road to Tusheti, regarded as one of the country’s most iconic tourist attractions, closed on August 20 when a powerful hailstorm hit the eastern part of Georgia, causing about 900,000 GEL damage mainly in the eastern Kakheti region.

The hailstorm resulted in a landslide that blocked several roads in the Tusheti region.

Today Georgia’s Ministry of Internal Affairs said the mountainous road connecting Shatili and Mutso villages had been cleaned, fixed and reopened. Additionally, the damaged road from Tusheti to Mutso as well as the Shatili-Mutso-Girevi track had also been cleaned up.

At this stage only off-road vehicles are allowed in the Shatili-Mutso areas, said the Ministry.

After the storm hit on Friday, helicopters airlifted 620 tourists from Tusheti after they were stranded there when a landslide blocked roads in several directions.

Specifically, the Omalo-Lechkhumi and Alvani-Omalo roads were closed and people in the nearby mountain villages were unable to leave. An evacuation plan saw the stranded population taken by Georgia’s Border Police to Omalo village, where they were helicoptered out of the area by two Border Police helicopters.

Rescuers and border guards transported 620 tourists to Pshavela village, Akhmeta [in] east Georgia from Omalo by helicopter and were then transported to Telavi, to eastern Kakheti region by police and rescuers’ vehicles,” said the Ministry. 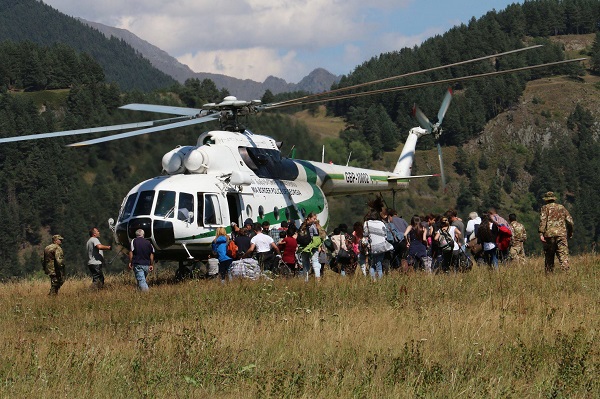 Last week’s natural disaster was said to hinder the annual Tushetoba celebration that was scheduled to take place on August 22 but was subsequently postponed for a week.

The Tushetoba public celebration every August aimed to popularise Georgia’s mountainous regions and protected areas. Various entertaining activities, including cooking some of the region’s most famous food in open air, are performed during the festival that attracts both Georgians and foreign visitors.