Three months on from the flood that destroyed Tbilisi Zoo, the animal park is gearing up to reopen next month.

Zoo officials said workers had spent months carrying out immense rehabilitation works to reopen the park for visitors. The destroyed lower area of the Zoo will remain off limits however clean-up efforts are coming to an end in the upper section of the park and this area will reopen and operate as normal.

One positive thing to emerge from the disaster is when Tbilisi Zoo reopens it will be home to several new monkeys, who will be sent here from abroad. Other animals will also join Tbilisi Zoo as soon as new, open-air cages are constructed on the Zoo’s territory.

The deadly flood that struck Georgia’s capital Tbilisi on June 13 turned out to be the city’s worst human and infrastructural disaster in years. Nineteen people lost their lives in the disaster and several still remain missing. 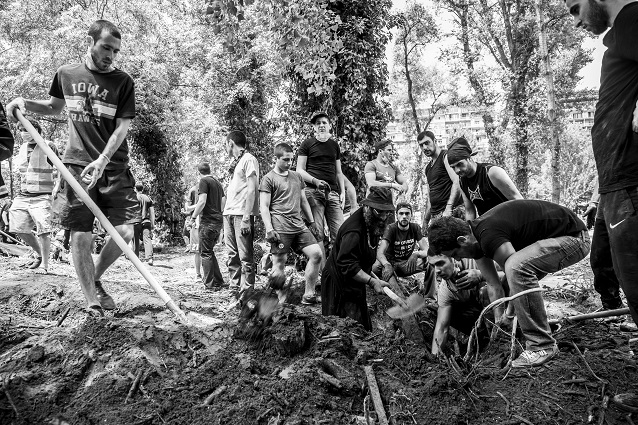 People helping out near the Tbilisi Zoo territory after the flood disaster. Photo by N.Alavidze/Agenda.ge

The flash flood ripped through Tbilisi Zoo and swamped many of the lower enclosures, causing many dozens of animals to either drown or be swamped in their cages. The entire lower portion of the Zoo was destroyed, as was several nearby residences.

Despite losing half their animals, Tbilisi Zoo was resilient in the face of disaster. Those that survived the flood included 16 carnivores, 98 reptiles, 469 fish, 129 ungulates, 7 primates and 144 birds.

Looking ahead the Tbilisi Zoo will be relocated to a new location near Tbilisi Sea. Zoo’s Deputy Director David Taktakishvili said the new area had been selected and a concept plan was currently being produced.

Tbilisi City Hall is actively involved in this process and our aim is for the new Zoo to approach European and American standards. The large territory that covers 47 hectares gives us an opportunity to place large-sized, open-air cages where animals will be partially free,” he said.

Zoo officials did not know when construction would begin on the new Tbilisi Sea territory but estimated it would be at least two-three years before the new Zoo was operational.

If you wish to donate to the Tbilisi Zoo relief fund, you can do it here.