How will the Georgian highlands be developed in 2019-2023?
Georgia announces mountain strategy priorities

Georgia has a new mountain development strategy for 2019-2023 that is expected to help the country find the best use for its greatest wealth, its mountainous regions, for the development of the economy.

Georgian Prime Minister Mamuka Bakhtadze has presented the ‘Development of High Mountain Regions of Georgia 2019-2023’ policy which addresses the challenges faced by the highland population of Georgia and promotes local economic development in the mountainous regions.

In order to implement the projects included in the strategy the National Council for Mountain Development and the Fund for Development of the Highlands of Georgia have been allocated 66 million GEL (about $24.84m/€21.90m).

Stable and irreversible development of the mountains has made it essential to develop a long-term strategy. We wish this strategy would have existed since the day Georgia regained its independence. It would have enabled us to address many current problems of the highlands much earlier, however I am confident that this strategy will enable us to overcome all these fundamental problems in a very short period of time”, said Bakhtadze yesterday, while presenting the strategy to Georgian society. 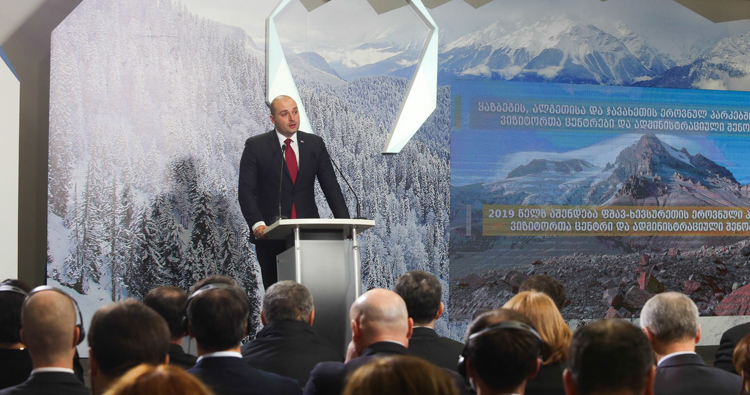 Bakhtadze thanked the United Nations Development Programme (UNDP) for its “active support” in the formulation of a strategy and the Swiss and Austrian authorities.

Mountains are the historic and cultural wealth of Georgia. It is our duty to take good care of this asset, maintain and protect them from abandonment. We all know how harsh the conditions are and that is why we highly value your individual contributions. We wish to ease your life and create decent living standards there”, Bakhtadze said to people living in mountainous areas of Georgia.

The major priorities of the strategy is the sustainable development of Georgia’s highlands, supporting small and medium sized business there, farming and cooperative development, promotion and production of demanded agricultural products.

The strategy aims to ensure the sustainable development of mountainous settlements, along with the support of small, medium to micro businesses, farming estates and cooperatives, facilitation of high-demand products on the market and support for their production. Investment programmes will be developed to cater to the needs of mountain enterprises and farming estates. 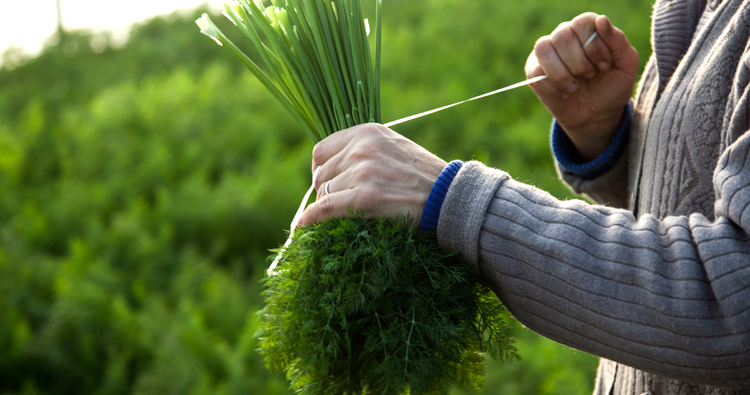 One of the initiatives that is planned for developing organic farming in Georgia is to liberalise the tax regime. Photo: N. Alavidze/Agenda.ge.

State support programmes will be intensified to facilitate the agro-industrial cooperatives.

Our vision is to develop such segments of the agriculture sector, which will focus on the production of organic products and this is an advantage of the highlands. Therefore, when we pass the Law on Granting Full Tax Exemptions for Organic Production, it may be said that the Georgian highlands will be one of the first to enjoy the unique tax exemptions”, said Bakhtadze.

The strategy lays out specific projects, such as the construction of dairy production enterprises in Tsalka, Dmanisi and Akhalkalaki Municipalities; the facilitation of honey production in Kazbegi; the support of economic and entrepreneurial activities of local residents by protected areas of Pshav-Khevsureti; tertiary training and retraining of seekers; facilitation of traditional crafts production, and; support for timber production along with the energy-efficient panels and palettes.

The reparation of existing roads will be continued and at the same time new roads will be built in Georgia’s highlands. 64 million GEL has been allocated for constructing and repairing roads in highland areas in 2019. 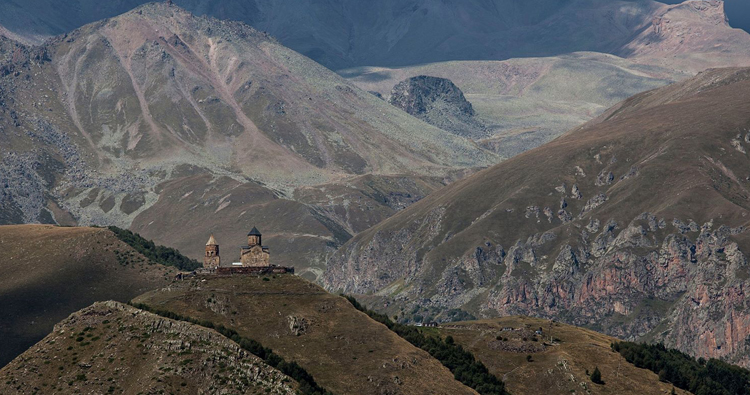 The Gergeti Trinity Church is a 14th-century monument located on the top of a hill in Stepantsminda in the north of Georgia. Photo: Agenda.ge.

It is also planned to construct wide roads of strategic significance. These are such roads that increase the economic activities of highlanders and will improve their living standards. Such projects include:the  construction of Roshka-Arkhoti road linking with the Other Khevsureti, construction of a 54 km-long motorway in Racha, about 200 km-long motorway linking Sno-Juta-Roshka-Shatili and several other valleys”, said Bakhtadze.

Tourism is the most important and we prioritise mountain tourism all year round. Hence, the development of tourism infrastructure and service development will facilitate the implementation of such specific projects as the recovery of Old Dikli castle village in Tusheti, construction of a water treatment facility by Paravani Lake, restoration of Mestia and Ushguli and construction of a new museum in Oni”, said Bakhtadze.

In two years over 50 new hotels will be opened in Georgia’s mountains which will provide more than 4,600 beds.

The restoration of monuments of cultural heritage in mountains areas will continue. 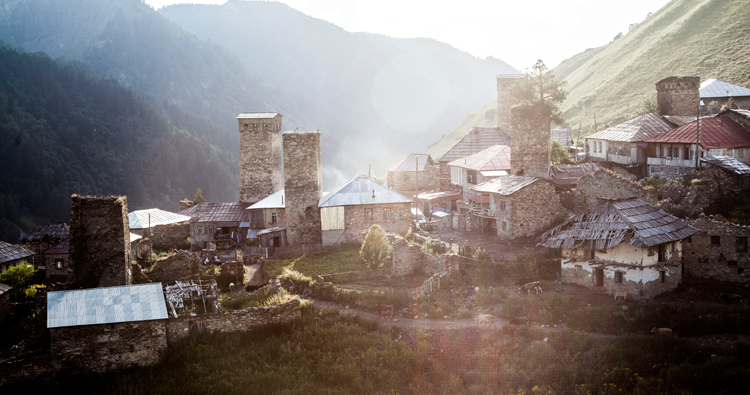 Recent improvements to infrastructure and rehabilitation of historic monuments have made Kazbegi, Shatili and Mutso more attractive to tourists. Projects are planned for the restoration of Mestia and Ushguli from the following year. Recovery of Chazhashi monitoring and observation towers in Ushguli community will be continued. A project for the restoration of Mutso will be completed in the following year as well.

More wide-scale mechanisms will be introduced to boost the birthrate with an aim of improving the demographic conditions. Tailor-made programmes will be developed and introduced in 2019 to facilitate the economic activity of the youth in highlands”, said Bakhtadze.

State programmes for first aid medical service access have already been developed within the strategy. 30 volunteers have been selected for these programmes.

These people are true patriots of our country and I wish to thank them for being ready to provide first aid to mountain residents for free”, said Bakhtadze. 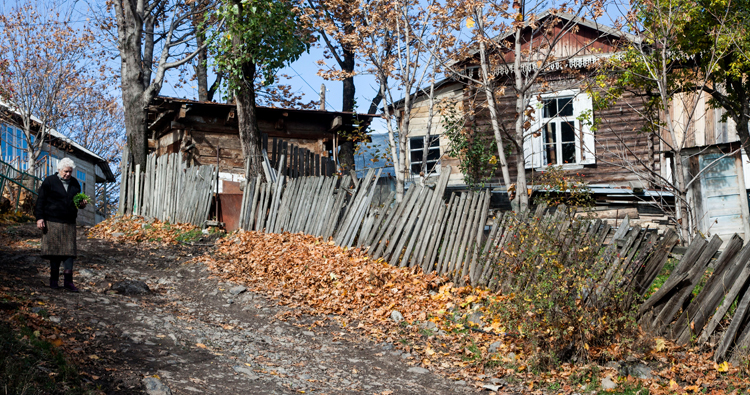 Access to utilities and telecommunication services will be increased. Substantial steps will be made for the supply of power energy, natural gas, drinking water, sewage systems and waste management services in high terrain regions.

Significant water supply projects will be launched in 2019, including in Stepantsminda and adjacent villages, along with Tsaghveri, Vale, Mestia, Abastumani, Bakuriani and Gudauri.

If the region does not allow for power energy supply through cabling, it will be provided through alternative sources.

About 400 households in all the villages left without power supply in the high terrain regions will get alternative sources of energy in 2019, while all the mountainous settlements will get mobile telecommunication and internet access by 2020. Work is in progress to ensure internet access in Pshav-Khevsureti and Gudamakari valleys”, said Bakhtadze.

One more significant priority of the strategy is to ensure access to public services in high terrain regions. Innovative systems of management and services will be introduced. Electronic engagement of citizens will be developed along with municipal websites. The number of public service centers will be increased.

One of the significant tasks of the strategy is to improve the current infrastructure of education institutions.

The construction of six new schools will be launched in 2019 and work will be carried out to the amount of about 15 million GEL for the renovation of existing schools. 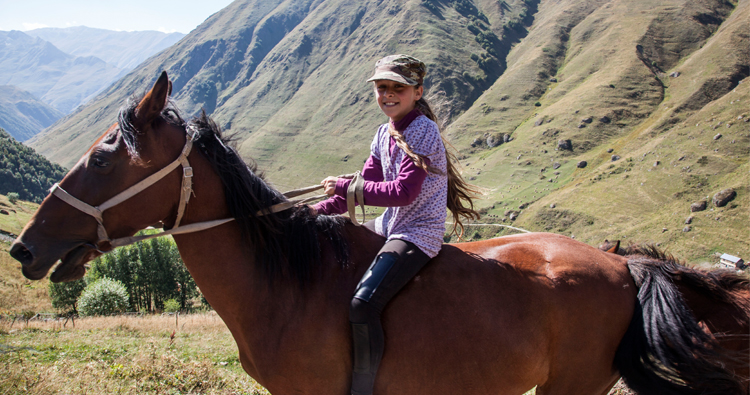 12 new kindergartens will be constructed and routine transportation will be provided to school children. Photo: N. Alavidze/Agenda.ge.

Quality general and tertiary education will be accessible to all.

12 new kindergartens will be constructed and routine transportation will be provided to school children.

Funding for students will be continued in support of youth living in highlands.

Installation of early warning system of disasters is very important in mountains to safeguard from those caused by the climate change, said Bakhtadze.

We have allocated very substantial funds towards this end and designed pilot projects also. We will be carrying out preventive measures to mitigate the harm caused by natural disasters. It implies the clean-ups of various valleys and river beds, installation of four automated meteorology stations, forestation, improvement of sanitary conditions in forests and recovery of post-fire aftermaths in mountains. Most significant component of the strategy is also the introduction of insurance programs to minimise the harm caused by natural disasters”, he said.

What is already done for developing Georgia’s mountains?

The major development of Georgian mountainous regions started with the launch of the Mountain Law in Georgia, which came into force in July 2016. Status of mountainous settlement is currently enjoyed by 1,730 settlements. After the implementation of the strategy, life will considerably change to the better for over 300,000 individuals „and it is almost 10% of our population”, said Bakhtadze. 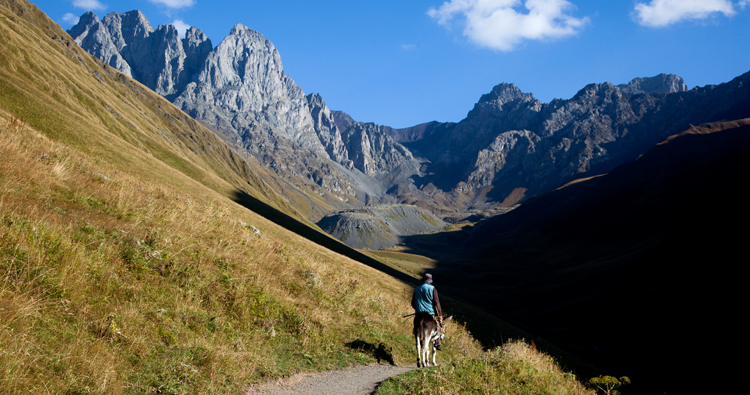 So, what exactly are the benefits people in Georgia’s mountainous areas enjoy?

These are some major benefits mountain people get in Georgia, while more are coming soon.

Development of highlands has been declared as a priority of the government of Georgia and we passed a Law on Mountains, which has enabled us to address the issues of tier one for you. It is a predominantly cash support, which covers many segments: about 19 million GEL has been disbursed for the newborns to the eligible families, supplements to pensions for highlanders have amounted 61 million GEL, addition to the social security package was earmarked in the amount of almost 8 million GEL, supplement to the wages of medical personnel amounted 9 million GEL, while that of the teachers and sports coaches - almost 20 million GEL. Over 110 million GEL have been spent so far towards this end. In addition, almost 315 enterprises enjoy tax incentives for highlanders”, said Bakhtadze. 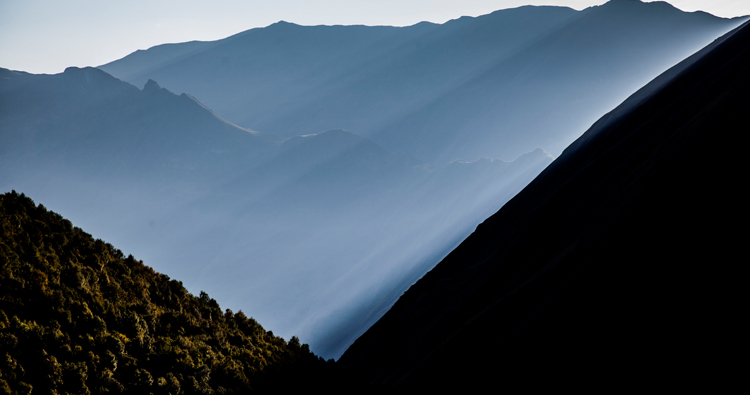 65% of Georgia's territory is covered by the mountains. Photo: N. Alavidze/Agenda.ge.

Bakhtadze highlighted some of the major infrastructural projects that had already been development in Georgia’s highlands.

A 2 km-long motorway tunnel has been constructed at the crossroad of Dariali and Devdoraki Valleys. In terms of its magnitude and scale, nothing similar has been built in Georgia since 50's. Natural disaster has been repeated several times in recent years in Dariali Valley. Construction of this tunnel has made the travel safer in the referred location. Construction of a new and almost 6 km-long access road has been completed by Gergeti Trinity Church. It is a special landmark destination for tourists and new road will substantially facilitate the development of tourism potential in Kazbegi”, said Bakhtadze.

Within the celebration of the International Mountain Day symbolic awards were given to people who contributed to the development of Georgia’s mountains, people who live and work in the country’s highland areas. 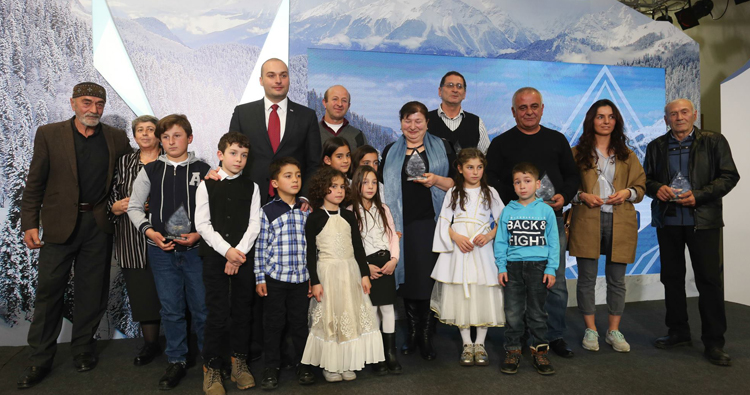 PM Bakhtadze together with the winner of "Children of the Mountains" Award. Photo: Ministry of Infrastructure.

Bakhtadze initiated to establish a local celebration of a ‘Week of Mountains’, which will symbolically be celebrated in the week starting from July 16 - day when a ‘Mountain Law’ of Georgia was adopted.

It will enable us to celebrate it together with you in mountains and turn it into a genuine public festivity - a celebration of Georgian highlands”, said Baktadze.

Also a special faculty will be created at the Georgian Technical University.

With an aim of irreversible state policy on mountains and generation of more resources for future, we decided to establish a Department of Highlands at the Technical University of Georgia. This program will be adequate to similar existing programs taught throughout the world and will respond to the needs and your problems in high terrain regions”, said Bakhtadze.