The first display in two decades of theatre costumes and archival exhibits of Georgia's famed theatre designer Soliko Virsaladze will open at Tbilisi's National Gallery venue this week to celebrate the major figure of the country's stage art history.

The Georgian National Museum network, of which the National Gallery is a member of, revealed up to 200 items would be sourced from the museum of Virsaladze, as well as the Art Palace venue and the Sukhishvili National Ballet troupe, to make the exhibition possible.

The retrospective selection, coming via curator Elene Abashidze and co-curator Lana Karaia, will bring the legacy of the set and costume designs by Virsaladze back to the gallery that hosted his previous display to decades ago.

It will be set up to introduce to visitors the work of the artist who is considered one of the most significant names of the professional stage art scene of Georgia, through his decades of work creating costumes and sets for both theatre productions and the Sukhishvili folk dance ensemble. 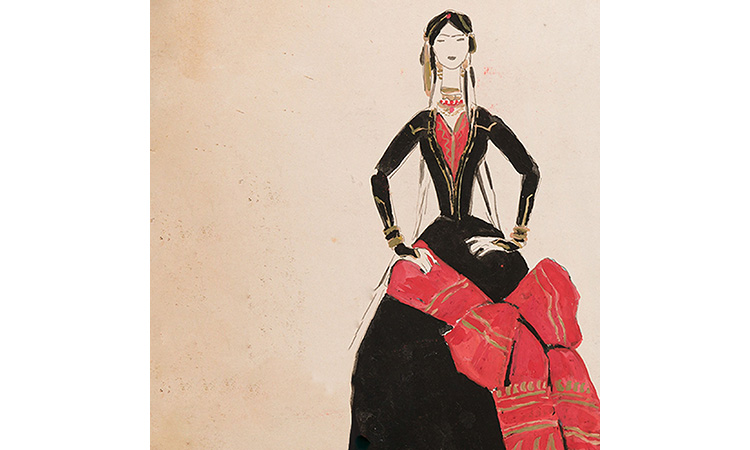 Virsaladze designed costumes both for ballet classics and folk dance productions of the Sukhishvili troupe. Image via Georgian National Museum.

Graduating from the Fine Arts Academy of St Petersburg in Russia in the late 1920s, as well as the school resulting from the institution's merger with the Moscow Institute of Art in 1930, Virsaladze maintained close ties with major painters of the Soviet Union in the era, such as the internationally recognised Bolshoi Theatre choreographer Yuri Grigorovich.

With Grigorovich, Virsaladze worked to create designs for over a dozen ballet productions at the Bolshoi Theatre in Moscow, including classics The Nutcracker, Swan Lake and Romeo and Juliet. He was also commissioned to create costumes for productions in St Petersburg (Laurencia and The Heart of the Mountains by Georgia's celebrated choreographer and dancer Vakhtang Chabukiani).

The ballet classics the painter produced designs for also included The Sleeping Beauty, Othello, Les Sylphides and more. Virsaladze also created some of the iconic costumes for the Sukhishvili troupe, one of the most recognised Georgian dance companies.

Virsaladze's work for stage art led to state-level distinctions, including the titles of the Merited Worker of Arts of Georgia and the People’s Artist of the Soviet Union. In 2015, Georgia's seaside city of Batumi honoured his legacy by hosting an exhibition dedicated to the artist at the Adjara Museum of Arts.

The National Gallery display will be on at the venue located at 11 Shota Rustaveli Avenue in Tbilisi between January 14-February 13.