Georgian justice minister Rati Bregadze on Thursday rejected claims by a former supreme court judge about interference in courts by ruling Georgian Dream authorities as “unacceptable” and urged any claimant to “address relevant state bodies” if they believed pressure had been exerted on them.

Bregadze was responding to allegations by Besarion Alavidze, who left the supreme court over a year ago, who told the opposition-minded Mtavari Arkhi channel on Saturday ruling authorities had pressured judges for “favourable rulings” over a number of publicised cases in recent years.

The interview was followed by a social media post by Soso Gogashvili - the former deputy head of the country's state security service who was charged with misuse of authority, possession of state secrets and personal data in July - who said during his time at the service the state body had indeed exerted pressure on Alavidze for gaining favourable outcome in a highly public case over the ownership of the Rustavi 2 TV channel over the recent years.

In his response, Bregadze told reporters he did not believe “anyone in Georgia” could “dare to exert pressure on a judge”, noting “even the theoretical assumption that someone may put any kind of pressure on a judge is, of course, unacceptable”. 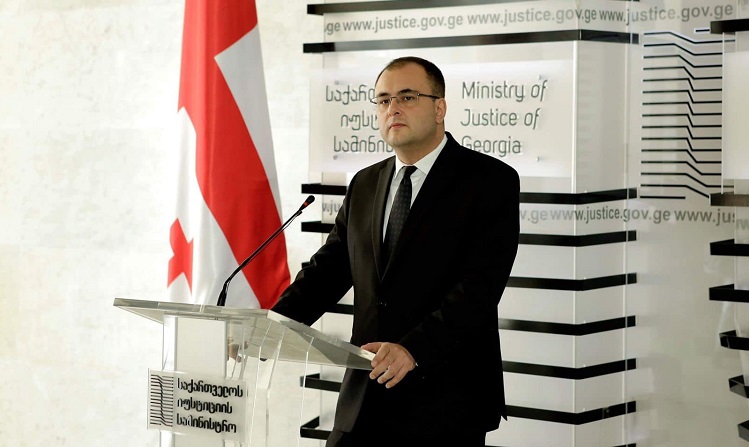 Georgian justice minister said that certain forces were trying to assure the public there was a "clan" in the court system, which he said was "disinformation" and "unacceptable". Photo: justice ministry press office.

The official said his ministry was not mandated to look into the cases but urged judges and other individuals to address relevant agencies in case of claims of pressure.

The ministry has no levers to start investigation into such cases. However, my position is that exerting any kind of pressure on a judge is absolutely unacceptable - the Georgian constitution says this. If anyone believes that they have suffered pressure, they should address relevant state bodies, and I am sure they will find justice”, the minister told the press.

Levan Murusidze, a court of appeals judge, responded to allegations of Alavidze on Thursday, claiming “certain forces” had “plans to discredit the court” with the accusations and stressing “no pressure had been exerted either on Alavidze or any other judges”.

Murusidze also claimed he had recently received a letter from Gogashvili from prison, where the former security service official was requesting help in his release and threatening to “take steps against the court system”. The judge said he had plans to address the prosecutor’s office against the imprisoned official and present evidence of the letter.