Strengthening of regional cooperation on the backdrop of Russia's military aggression against Ukraine was discussed by the Georgian foreign minister Ilia Darchiashvili and  his counterparts from Moldova, Azerbaijan and Ukraine on Tuesday, as part of the 39th session of foreign ministers of the Organisation for Democracy and Economic Development (GUAM), the 1997-founded organisation bringing together the four states.

Hosted as part of the week of the United Nations general assembly, the gathering also featured Altai Efendiev, the secretary general of the organisation, and emphasised the “changed geopolitical environment and security challenges” created as a result of the conflict, the Georgian foreign office said.

In the discussions, the Georgian FM highlighted  the “solidarity shown by Georgia to Ukraine and its people” since the beginning of the war, and noted the political, diplomatic and humanitarian support provided by the country “in both bilateral and multilateral formats”.

Darchiashvili also informed participants of the session about the current situation and security environment in the Russian-occupied regions of Georgia. 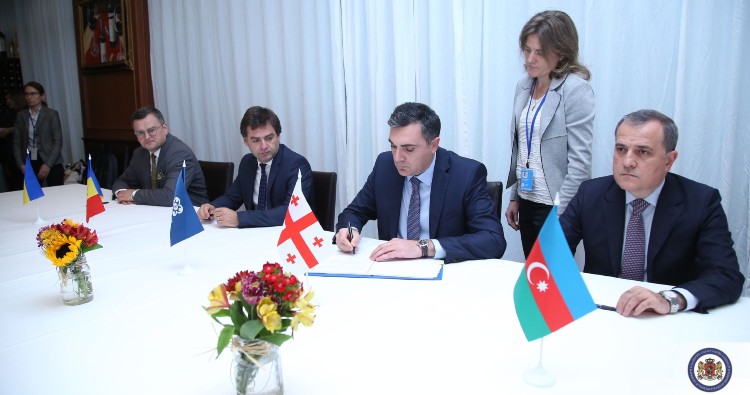 The meeting emphasised the importance of strengthening cooperation in transport, connectivity and energy, which the officials noted had become a priority in the wake of the war.

The ministers signed a protocol on the establishment of a free trade zone of the organisation, and emphasised the importance of “coordinated interaction” between member countries within the framework of international organisations, while noting the existing formats of cooperation with partner countries and perspectives of their expansion.