Georgia’s real economic growth in the past year was 2.5 times higher than originally forecast, with government savings in 2022 expected to approach the pre-pandemic mark, finance minister Lasha Khutsishvili told the parliament on Thursday.

Speaking to MPs as part of the Minister’s Hour format, Khutsishvili said the final estimation of the 2021 growth reached 10.6 percent, marking a significant increase over the initial projections.

The minister also told legislators that compared to 2019, growth rate had improved by 3.1 percent and seen the nominal GDP increase to 59.6 billion GEL, instead of the initially forecasted 53.4 billion.

The government’s efforts to support business during the initial stages of the pandemic resulted in the “declared number of employees” in 2021 exceeding the 2019 figure by 4.0 percent,” the minister’s report also explained. 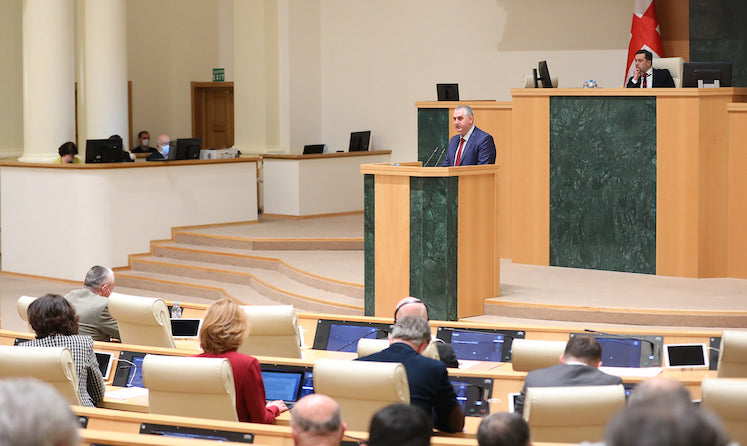 "In parallel with the economic recovery, the level of government savings in 2022 will approach the pre-pandemic mark and will exceed 4 percent,"  Khutsishvili said in comments around macroeconomic indicators for the current year. Photo: Georgian finance ministry.

Financial authorities have developed a reform strategy in cooperation with the International Monetary Fund, the finance minister also told MPs, along with approval of the Corporate Governance Code for state-owned enterprises.

Comments by the official to the parliament also included data on the figure of VAT refunds in 2021, which amounted to 930 million GEL - 900 million more than in 2020 and a 300 million increase compared to 2019 - as a result of the full implementation of the automatic return system.

Khutshishvili highlighted “constant dynamics of reforms and the efficiency of the Revenue Service, which is critical for the country's economy” in his assessments.

The head of the finance ministry said a project for accelerated registration of goods for customs was being developed, in addition to the introduction of a unified electronic database of goods and a system for issuing permits with commodity codes.

Introduction of an electronic licensing system - entitled STRATLINK - for strategic goods, and creation of a new computerised transit system NCTS were also among the talking points of the minister, who said the reforms would contribute to effective tax administration and a simplification of customs procedures.