Georgian Prime Minister Irakli Garibashvili, President Salome Zourabichvili, Tbilisi Mayor Kakha Kaladze and Government ministers on Tuesday paid tributes to the eight victims in the rescue helicopter crash in Gudauri in the country’s north on Friday, with the public funeral hosted at the Holy Trinity Cathedral in the capital.

Expressing their sorrow over the tragic incident at the funeral, the state officials said all the victims were “heroes”.

Today is one of the most difficult days in the history of modern Georgia”, Justice Minister Rati Bregadze said.

Earlier on Tuesday President Zourabichvili awarded the crew, rescuers and first responders who died in the border police helicopter crash with the state Medal for Civic Dedication. 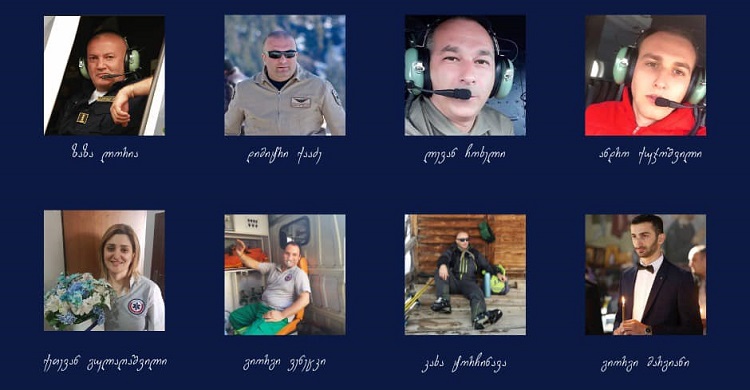 The President on Tuesday posthumously awarded the victims of the rescue helicopter crash. Photo: President of Georgia press office.

PM Garibashvili on Monday said the families of the rescuers and first aid responders who died in the helicopter crash would receive 100,000 GEL ($35,087) each.

The helicopter on a rescue operation in Gudauri lost control and crashed in a ravine last Friday.

The helicopter had been carrying rescuers of the Emergency Management Service and first aid responders called to assist paragliders who had ended up in the ravine earlier.

The victims will be buried with full military honours.

The reasons for helicopter’s crash are being investigated, with the Interior Ministry dismissing allegations over technical flaws.