Closing Speech of the Prime Minister of Georgia Irakli Garibashvili presented on Wednesday in the Parliament.

“Thank you Dear Speaker and honorable MPs! First of all, I wish to thank you all and note once again that asking questions and skipping answers is not a European political culture indeed. No representative of the destructive force is in the plenary room. They tried to create a certain destruction, received ten times more answers and will always do, if they do not stop misbehaving. I wish to once again remind our society that the world is currently challenged with a very difficult situation and our small country with our proper, pragmatic and national policies maintains peace, stability and a double-digit economic growth indicator in the current circumstance. We heard a lot from MPs and I noted many times as well that facts need to evidence our words, my dear friends. Each speech, each remark was based on facts only. Our people, society need to hear only facts and truth. I explained in my speech in detail all the publicly noted or discreet reasons. In this case as well, I wish to once again note the reason for an unfair decision - to put it mildly - made towards granting a candidacy status to Georgia. I started my speech with achievements, specific and real milestones that were demonstrated by our team - Georgian Dream - in the recent 10 years with our diligent and hard work, dedication towards our country, people, European integration and Euro-Atlantic aspirations.

Every rating and achievement, of course, evidences the labors of these 10 years. Nevertheless, I wish to note again that the most positive of all is that for the first time ever Europe publicly acknowledged the European Perspective of Georgia, i.e. wide-opened its doors to Georgia and Georgian people. It is, of course, a gratifying decision. This process will not be jeopardized by anyone, of course. It is an irreversible process and we made it such. Let me repeat, with EU Association Agreement and DCFTA, Free Trade Agreement, visa-free travel arrangement and now already with official EU Accession Application, followed-up with a European Perspective and candidacy status with preceding conditions we pride ourselves, harm is obvious, as we once again explained to people that unfortunately local or external adversaries - I will not be modest in saying this - Fifth Convoy - yes, Fifth Convoy - and as my friend Irakli noted - Shulaveri Committee dare to speak when the country is at war and when 20 percent of its territories are occupied; this destructive force and the most anti-European, most inhuman and anti-democratic force that led to the occupation of 20 percent of our land with its reckless politics; they come and dare to cause destruction and instability. Let me remind our people that it was the purpose of the former president shamefully sneaking into the country. The so-called president Saakashvili did so to cause only one result - revolution. When one causes revolution, when one creates chaos in a country with 20 percent occupied by Russian troops in merely 40 kilometers from this building, is it not a direct provocation to start a war? Of course, it is. 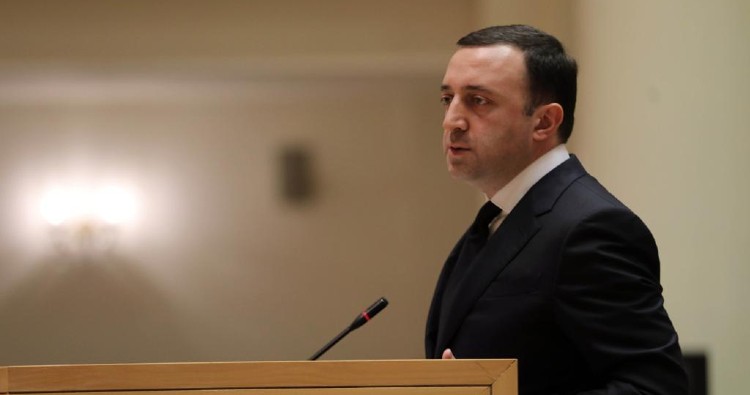 It was a second attempt of making Georgia somehow involved in this devastating war, in the war of Ukraine and Wise Roman [MP Gotsiridze] made forecasts. Can you see that war cannot be stopped? Unfortunately, sadly, thousands of people die day after day, cities get destroyed and 20% of Ukraine is already occupied, conquered by Russia while the entire world sadly fails to stop the process. When one wants to involve this small country in a provocation and in this war, of course, it is enmity and treason of our country and people. That is why, everyone will be liable for this treason. This country will have no war and neither second or third front lines. Country will have peace, stability and development. This peace and stability will be protected. We will protect it by all means. It is our very strong position and nobody should be illusioned otherwise, my friends. They are playing with fire. Country needs peace, stability and development. We now need to get mobilized - government and parliament together - to make sure that we continue with reforms as soon as the European Council announces its decision, as soon as the recommendations of the European Commission get approved and endorsed. We have no time to spare. We should continue with implementation of reforms in a calm, firm and prudent manner. Of course, we have no illusion that we will manage to end the polarization, as we are seeing that these people do everything to create chaos, instability and permanent polarization in the country. Let me hereby note with sadness that if Europeans had considered that by not granting us the candidacy status they would not be ending polarization, but the other way round - further increasing it. Presumably, it would have been better if it had happened otherwise. Nevertheless, we will try to explain to our European colleagues that Georgia deserves more, our country deserves peace, development, prosperity and neither internal, nor external enemies will succeed. Our nation is wise. We need consolidation, peace, stability, development and we need to have our common dream come true. It is the unification of our country. This should be our common national idea and goal to unite the country, rather than splitting it or giving out territories to the occupying force as they did.

I wish to hereby thank every MP again. I wish to thank our media, our viewers, our citizens, our people for everything.

Let me once again note that Georgia has a European future, which is progressive, genuinely European. We will do our best to bring greater progress and development - to our people. Let me assure you that our government - our team, the entire Georgian Dream - will do its best to maintain peace, stability and development in the country. Nobody will be able to stop us, but if somebody tries and creates any type of instability, we will protect the peace and prosperity of our people with every lawful means. We will even protect the peace of our country and people with sword and fire. Nobody should ever doubt it! God bless Georgia! Glory to our country and our people!”

Conclusive Speech of the Prime Minister of Georgia