Georgian Prime Minister Giorgi Gakharia has raised the issue of the ‘severe humanitarian crisis’ in Georgia’s Russian-occupied regions of Abkhazia and Tskhinvali and recent illegal conviction of Georgian citizen Zaza Gakheladze by occupation forces at a meeting with UK Minister for European Neighbourhood and the Americas at the Foreign, Commonwealth and Development Office Wendy Morton.

Morton has paid her first official visit to Georgia earlier today and is scheduled to visit the occupation line in the village of Odzisi, central Georgia later.

Threats coming from Georgia’s Russian occupied regions, regional issues and Georgia’s role in the Black Sea region were discussed at the meeting,” the government of Georgia press office has reported. 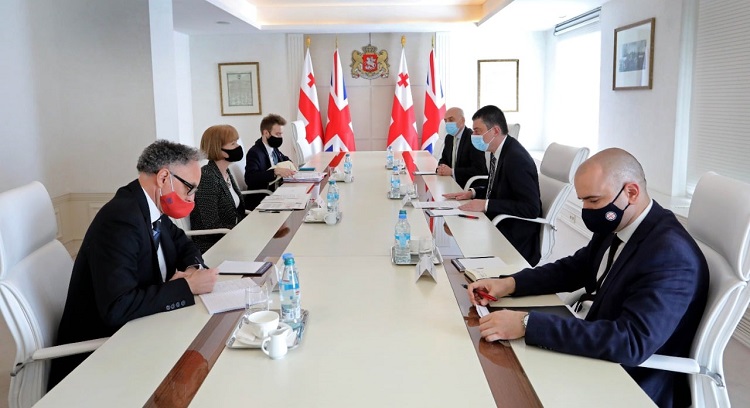 Morton and Gakharia have praised the countries' joint efforts against cyber and hybrid threats. Photo: government of Georgia press office.

Gakharia has mentioned the consistent illegal detention’ of Georgian citizens and ‘provocative actions’ by occupation forces, as well as Gakhelade’s illegal conviction and severe humanitarian situation on the ground, the press office said.

Gakharia has thanked Morton for visiting Georgia and stated that the UK and Georgia are able to further strengthen bilateral relations.

Brilliant exchange of thoughts with @morton_wendy on strategic partnership between ????????-????????. Strengthening the democracy is at the heart of our commitments and cooperation. I am grateful to her for the visit and friendship. pic.twitter.com/ejzgiblBjo

During the meetings Morton has reiterated the UK’s support for Georgia’s territorial integrity and the country’s NATO and the EU aspirations.