MEP Cramon stated that the Georgian government is ‘trying to abolish’ the Inspector’s Service, calling it ‘one of the most professional and well-functioning state institutions.’

Very disturbing what’s going on in ???????? over #Christmas. Government tries to abolish one of the most professional, well-functioning state institutions, the State Inspector‘s Service. This doesn’t look like a promising start for 2022 #democracy #ruleOfLawhttps://t.co/cPrBzPU48s

Cramon, in a comment to local media outlet Netgazeti, said the government in Georgia ‘is not interested in professional and well-functioning state institutions.’

GD party MPs put forward a bill on December 25 based on which the State Inspector’s Service would be replaced by two new agencies – the Special Investigation Service and the Personal Data Protection Service, which would be authorised to investigate offences committed by the authorities and to monitor personal data processing, respectively.

The Georgian parliament is hurrying ahead with the bill, approved on its first reading yesterday. The legislative body will continue working on the draft law today on its second and third readings.

The international community, NGOs and the parliamentary opposition are criticising the proposed changes and calling for ‘wide consultations’ and a pause on adoption of the law.

State Inspector Londa Toloraia also condemned the MP's new initiative, saying it is a 'punishment of the service for its independence,’ while Georgian Public Defender Nino Lomjaria and President Salome Zurabishvili also called on the legislative body to refrain from adopting the draft law.

The ruling party maintains that both the investigative and personal data protection agencies will be strengthened as a result of the changes, stating that, according to the bill, additional functions will be added. 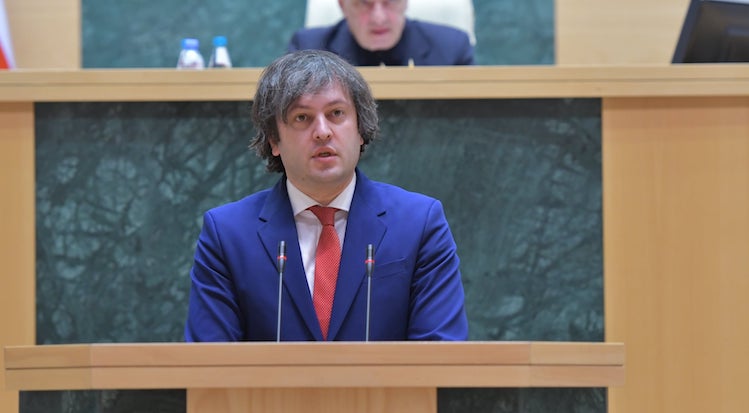 GD Head Irakli Kobakhidze said yesterday that the State Inspector’s Service along with two new agencies proposed by the party is ‘in contradiction with the Georgian Constitution,’ noting however that the regulatory underpinnings of it are sound. Photo: Parliament of Georgia.

If a [new] body is created by law this body can be created within the constitutional body, for example under parliament, government, court or any other body. This principle is violated from beginning to end,” Kobakhidze said.

He added that the new bill ‘regulates everything from an institutional point of view,’ saying that ‘legally everything is fine and we have not heard any remarks about it.’

The GD also says that employees of the state service will continue to work in the agencies.

GD MP Irakli Zarkua also stated earlier today that all 120 employees of the State Inspector’s Service will retain their jobs and will be redeployed to new agencies.