The first nationwide opinion poll about climate change conducted by the European Union (EU) and the United Nations Development Programme (UNDP) in Georgia reads that Georgians see climate change as one of  the top three challenges facing humanity, including poverty and infectious diseases.

The poll presents the results of the first nationwide opinion poll on public awareness about climate change, which was carried in August-September 2020.

The poll is based on face-to-face interviews with 1,100 people from all regions of Georgia.

The main findings of the research are as follows: 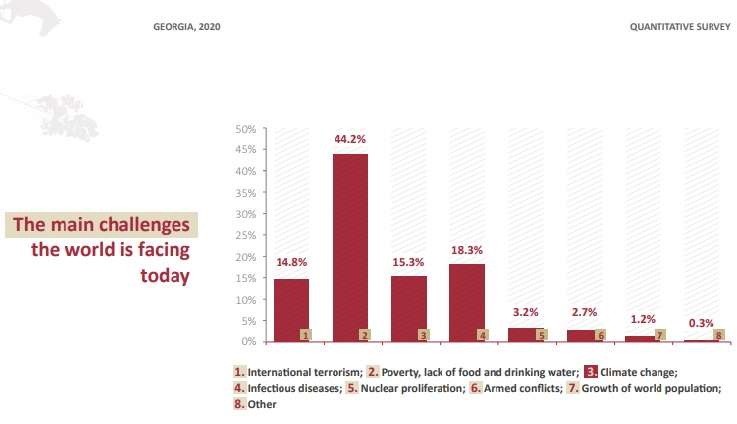 15.3 per cent of the respondents think climate change is one of the main challenges the world is facing today. Photo: infographic/EU-UNDP research.

Even those who said they had read something recently about climate change had a hard time remembering that it said. However, Georgians did have a very clear sense of the impact climate change might have on their lives, with large shares directly attributing floods, droughts, hail, landslides, torrential rain and other extreme weather events to global warming”, reads the report.

Out of 1,100 respondents, 45 per cent thinks there is still time to halt climate change, while 49 per cent believes it is already too late. 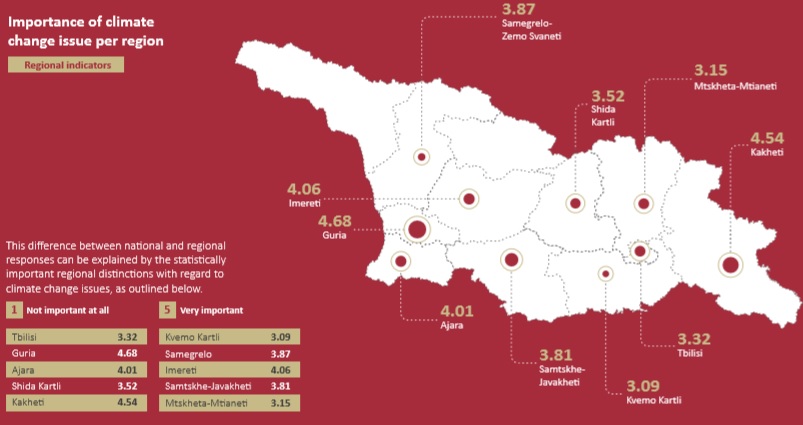 The UNDP Head Luisa Vinton said that ‘the research results are optimistic’, as Georgians understand that climate change poses immediate threats to lives and livelihoods, and they recognize that everyone has a role to play in saving the planet.

The new study was conducted as part of the EU-funded EU4Climate programme that UNDP implements in the six Eastern Partnership countries – Armenia, Azerbaijan, Belarus, Georgia, Moldova and Ukraine.

The four-year €8.8 million programme continues until the end of 2022.