Ruling party mayoral candidate and incumbent mayor Kakha Kaladze has called on all Georgian citizens to participate in the municipal election run-offs on October 30 and ‘to put an end’ to the opposition party United National Movement (UNM).

He also stated that the ruling Georgian Dream (GD) party’s victory ‘should be seen through to the end,’ underlying the importance of every citizen’s participation in the elections.

Based on the final results of the October 2 local self-government race the GD received 46.74% of the vote and won the majority of mayoral constituencies while the UNM received 30.68% and ex-PM Giorgi Gakharia’s For Georgia party gathered 7.79% of the vote.

Mayoral election run-offs will be held in 20 of 64 constituencies of Georgia, including the five largest cities: Tbilisi, Kutaisi, Rustavi, Batumi and Poti, as none of the candidates received at least 51% of the vote. 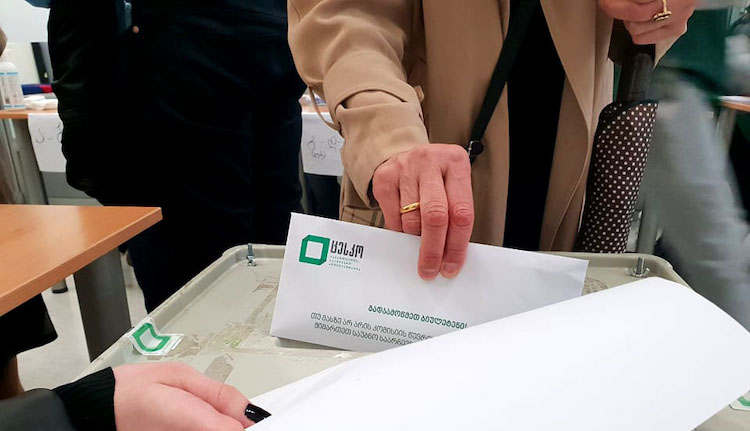 In 17 of the 20 election constituencies, the candidates of the GD  and the UNM opposition will compete. Photo: Nino Alavidze/Agenda.ge.

Kaladze, who expected victory in the first round of the elections, has stated that his election campaign was ‘European-style and future-oriented, unlike that of his opponents.’

Unfortunately, the public has not heard a single valuable suggestion from my opponent concerning the development of Tbilisi. Instead, their entire campaign was aimed at overthrowing the government, stirring up unrest, and the so-called referendum,” stated Kaladze.

He also noted that the ruling party offers ‘the most sophisticated and well-thought-out city development plan to the residents of Tbilisi.’

Kakha Kaladze will compete with the UNM head Nika Melia in the municipal run-offs in Tbilisi which will take place in two weeks.

The municipal elections were held in Georgia per a mixed electoral system. Voters had to fill three ballot papers: the first ballot paper is for mayoral candidates (which are elected per a 50%+1 system). The winner is the candidate who will receive at least 50%+1 of the vote, otherwise, the second round of elections will be held).

The third ballot paper was for parties, who needed at least 2.5% of the vote to receive seats in the Tbilisi City Assembly and 3% in other city assemblies across the country.