Advertising company ALMA has stated that they provided the National Centre for Disease Control (NCDC) of Georgia with the space for the Covid-19 vaccination campaign free of charge in response to the latter’s appeal to restore the vaccination banners replaced by anti-opposition political billboards on September 17.

ALMA claims that in April 2021 they provided NCDC with 40 outdoor advertising monitors and 14 billboards across the country, noting that ‘more than 50 advertising constructions and monitors are still dedicated to the vaccination campaign completely free of charge.’

Alma received remuneration only for printing banners and displaying them technically,” the statement of the advertising company reads.

It also says that per the agreement ‘the support campaign was scheduled for three months,’ noting that after these three months ‘NCDC has not asked to continue the campaign.’

A photo published on Facebook several days ago showed that a Covid-19 vaccination banner was replaced by a billboard depicting the opposition as ‘bloody.’ 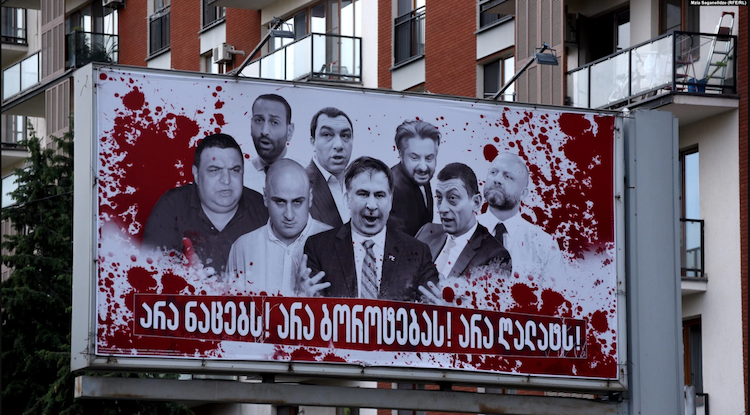 The billboards feature opposition political leaders and the media managers of two opposition-minded TV channels Mtavari Arkhi and TV Pirveli which reads: ‘No to Natsis (referring to the largest opposition United National Movement (UNM) party), No to evil, No to betrayal.’ Photo: Mzia Saganelidze/RFE/RL.

The NCDC stated yesterday that the advertising company did not notify the body regarding the change of the banners, noting that the replacement of their banners ‘was possible only with the prior agreement of the parties.’

The Central Election Commission (CEC) announced yesterday that they have launched an investigation into the issue after receiving two complaints regarding the anti-opposition billboards.