Journalists have gathered in Batumi holding banners ‘media under attack’ as the plane of European Council President Charles Michel has landed in the Black Sea town.

Michel, who arrived in Georgia following his visits to Armenia and Azerbaijan, will meet with Georgian and foreign officials in the frames of the Batumi International Conference tomorrow.

Welcomed @eucopresident, who is to participate in #BatumiInternationalConference and engage in discussions regarding ongoing challenges and ambitious plans of the #AssociatedTrio ???????? ???????? ???????? in the process of the European integration! pic.twitter.com/t90OS8600J

The protests have sparked in Georgia earlier in July after right-wing groups disrupted Tbilisi Pride march, assaulting a total of 55 individuals, including 53 media representatives.

TV Pirveli cameraman Lekso Lashkarava, who was among those attacked by the violent anti-pride activists, passed away soon after the incident. 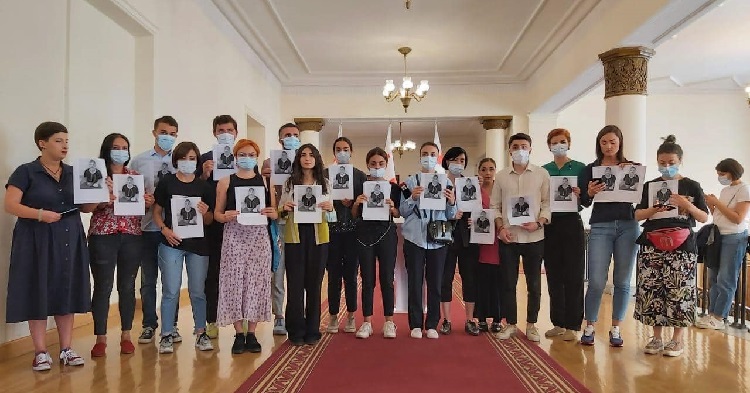 Journalists hold Lekso Lashlarava's photo in the parliament of Georgia where the interior minister was supposed to speak about the July 5-6 violence in Tbilisi. Photo: Inga Grigolia's Facebook

His colleagues from TV Pirveli as well as several other media outlets have been gathering in front of the parliament building since Lekso’s death, demanding Prime Minister Irakli Garibashvili’s resignation.

Earlier today, opposition MPs have disrupted the parliamentary hearing of Interior Minister Vakhtang Gomelauri, who – as they claim – has failed to protect the safety of media and activists during the Tbilisi Pride week.