Over 3 billion GEL (about $0.95 bln/€0.80 bln) will be invested in transport infrastructure in the next 10 years, Georgian Economy Minister Natia Turnava has announced while presenting Georgia’s new 10-year economic development strategy earlier today.

Turnava said that transport infrastructure is one of 'our key industries' and the Black Sea coast is the gateway that connects Europe and Asia.

She said that three major projects are underway currently: 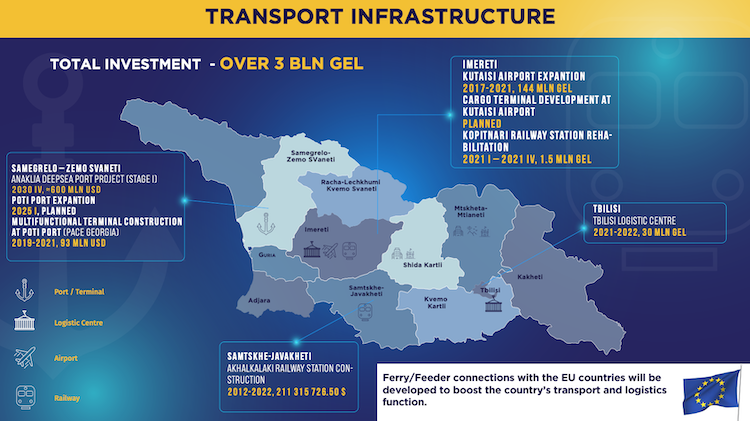 Turnava said that soon the process of reviewing the old feasibility study of the Anaklia port project will be completed and 'we will formulate the structure of this project to make it more attractive to talk to investors'.

Turnava also spoke about the progress of the railway modernisation project and the completion of the construction of a railway station in Akhalkalaki, which is a key point of the new railway route - Baku - Tbilisi - Kars.

Turnava said that the government is successfully developing the dry ports network near the capital city of Tbilisi and 'the first successful projects are already underway'.

Turnava announced that the development of Kutaisi International Airport continues and now a cargo terminal of the airport is being developed.

Minister Turnava said that it is important to develop freight traffic between the ports of Georgia and the EU countries.