The confrontation between ethnic Georgian and Azerbaijani population in the eastern Dmanisi municipality of Georgia has ended with reconciliation.

The opposing parties, who met at the Dmanisi municipal city hall today, said the conflict is over.

Reportedly, the conflict that started in one of the shops in Dmanisi yesterday grew in a physical confrontation between ethnic Georgians and Azerbaijanis. 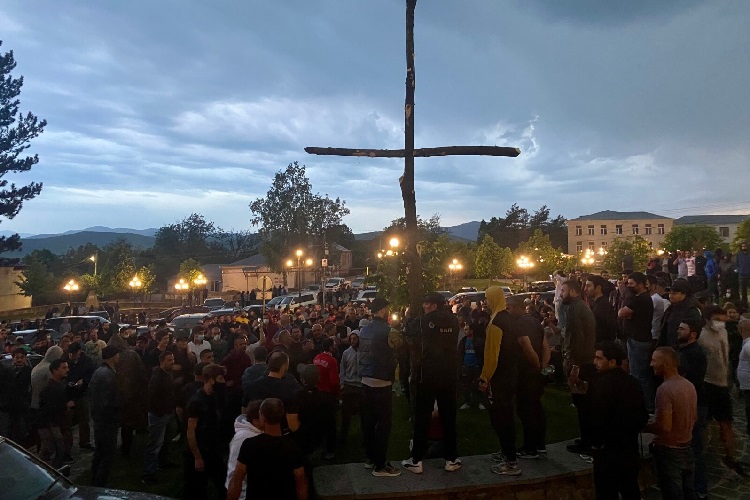 Dmanisi population hopes that no such incidents will take place on the ground again. Photo: Tornike Mandaria/RFERL

Embassy of Azerbaijan in Georgia released a statement saying that the mass raid on the ‘Omar’′ market that belongs to Azerbaijanis in Dmanisi should not be described as ‘a confrontation on ethnic ground’.

The incident that took place should be evaluated only in the legal institution and the accused should be punished individually according to Georgian legislation”, the statement reads.

The owner of the shop who is ethnic Azerbaijani also says that the representatives of any ethnicity should continue peaceful cohabitation in Georgia.

All of us are the citizens of Georgia. I am happy that I was born in Georgia”, he said.

Ruling Georgian Dream party MP Sozar Subari was among the negotiators, calling on the parties to reconcile.

We are a family and we should continue to live like that - everyone understands that well”, Subari said.

The conflict that started yesterday turned into a mass confrontation between locals. The Interior Ministry called on the confronting parties to adhere to the lawful demands of the police and avoid any escalation of the conflict on the ground.